Fred Lerdahl's three string quartets, written over a span of nearly thirty years, showcase the composer's remarkable talent for exploring the subtleties of the structure of music, forming a trilogy of works that function both as a unified whole and as individual units. The third quartet, commissioned by the Deadalus Quartet and premeired in 2008, is described by the composer as "[inhabiting] a world of abrupt mood changes, passionate urgings, quiet reveries, fantastical gestures, and sudden reminiscences."

The Deadalus Quartet, which has recorded all three of Lerdahl's quartets on Bridge Records, will perform the work on March 24th at the Chamber Music Society of Lincoln Center, alongside works by Wolfgang Rihm, Helmut Lachenmann, and John Harbison. The evening will feature a conversation with Lerdahl himself, and will be live-streamed here. Check out the Deadalus Quartet performing the work below. 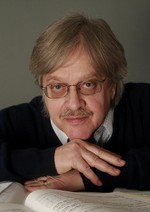