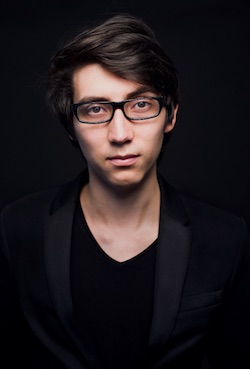 Since he began composing music at age 17, James Díaz has often thought of his music as a portal through which one could explore ambivalence: radical moments of sonic possibility. Diaz's music generates multiplicity in order to manifest new sonic worlds, both for performer and listener, fostering a curiosity that transcends existing understandings of musical tradition, history, and referentiality. Díaz's goal in composition is, as he says, "finding multiplicity in the work and in the world."

As a teenager in Soacha, Colombia, Díaz began to create music in his home recording studio, seeking out ambiguous, ambivalent sound worlds that mirrored the complexities of Colombian social life. Although at first he thought of music as an "escape" from the world, Díaz soon realized that music could rather serve as a tool for concretely altering the ways that we perceive the world, leading him to embrace the idea of "psychedelia": the  manifestation of the mind. And what led to these new manifestations were not chemical structures, but rather musical ones.

Díaz's compositional process always begins with something on the page: a melodic line, a rhythmic pattern, or some other structural idea that may or may not even be audible. From this organizing element, Díaz continues to compose new possibilities for musical dimensions in performance, often obscuring the original structure, which leads to new kinds of musical manifestations. Díaz's conservatory training exposed him to composers for whom these kinds of musical citations carried the ideological weight of national traditions, especially within the fraught periods of the late 19th and early 20th centuries; for Díaz, however, the "meaning" of these citations has possibilities for multiple dimensions of music.

"Infrastructures", Díaz's 2017 string quartet, was composed during the composer's first winter spent in New York City. The first and last movements are described as a kind of collage, sharing related musical materials but transformed through processes of inversion. Influenced by Díaz's study of the work of Morton Feldman, "Infrastructures" is a study in convolution—and as its title suggests, the many ways in which internal musical structures can play themselves out.

Díaz's 2018 "A Song For...", for amplified violin and electronics, continues this study with a very different kind of instrument. In this work, Díaz takes the sounds of the violin and convolves it with itself, producing a kind of reverberant sound world generated from the instrument and its player. The amplification of the instrument allows for small gestures to produce intense sounds, leading the performer to interact with her instrument in new kinds of ways.

"in her dream song", for piano trio, begins with a melodic fragment from "A Song For...". But unlike that work, for solo violin and fixed media, "in her dream song" asks the three performers to listen to each other as unpredictable, reverberant partners, triggering cues and actions dictated in the score.

"never was the way" continues Díaz's exploration of performative gestures of listening in a Pierrot ensemble, which also introduces the human voice. The score for this work is a fine example of the kinds of interactivity that Diaz wants to foster between his performers; the second movement, is written not in score format, but rather in independent parts (which you can see beginning around 5:55 above).

"in times of passive voice", Díaz's 2019 work for solo cello, allows for even more flexibility by the performer, providing them with several germinal musical structures and instructing them to perform them in an order of their choosing. The cellist's instrument is transformed into a new kind of partner with the combination of a metal practice mute, which eliminates nearly all of the internal acoustic resonances of the instrument, and heavy amplification, which emphasizes the noisy timbres of bow, string, and bridge.

PSNY is thrilled to publish these five interrelated works by Díaz, bringing his work to new performers who can continue to explore the mind-manifesting and ambivalent qualities of his work.