As the landscape of live musical performance continues to change in the era of COVID-19, composer Michael Hersch and his long-time collaborator, the sculptor Christopher Cairns, have planned an intimate series of concerts—each limited to 15 audience members—held in Cairns's studio in Havertown, Pennsylvania. Titled ...thus far and no further..., this series revives Carins and Hersch's practice of small, intimate, informal concerts held in Carins's studio among his work; both artists hope that this new five-event series will help (re-)imagine what live music can look, feel, and sound like in the current global climate.

Featuring world premeires by Hersch, Missy Mazzoli, Christopher Fox, Alican Çamci, and Patricia Kopatchinskaja—who is increasingly augmenting her proﬁle as a composer, in addition to her work as a violnist—this series will feature some of Hersch's closest collaborators, including Miranda Cuckson, Ah Young Hong, Emi Ferguson, Daniel Gaisford, and the FLUX Quartet.

Carins's sculptures, which were also featured in the set design of Hersch's monodrama On the Threshold of Winter, will surround the small audience, who will be presented with musical programs that pair world premieres with other works of our time by composers such as Rebecca Saunders, Meredith Monk, Georg Friedrich Haas, Anthony Braxton and Isabel Mundry, among many others.  Pre- and post-concert sound installations will also enhance the sonic experience of these five events, allowing audience members time and space to contemplate sculpture and music in a haptic, three-dimensional experience.

The first of Hersch and Cairns's five programs falls on October 24th, and will pair early vocal music by Machaut and Josquin with three works by Hersch (including the premiere of unwrung, apart, always), book-ended by Morton Feldman's sparse, enigmatic Only, for solo voice. This program will be performed by violinist Miranda Cuckson and flutist/vocalist Emi Ferguson. 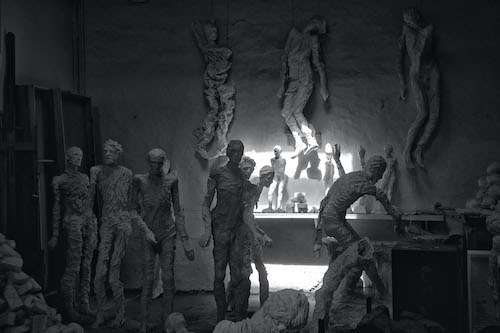