As Will Robin writes in his recent in-depth profile on Andrew Norman in The New York Times, a premiere of a new work by Norman is "a major event in the music world." Describing his somewhat hermetic, labor-intensive compositional practice, Norman reveals his dedication to the orchestral institution: "I love the orchestra, and I believe in it, and I think there’s a future there, and I think we should all be trying as hard as we possibly can to figure out where that medium can go."

On the heels of his successful premiere of Switch at the Utah Symphony, and in anticipation of a new commission from the Los Angeles Philharmonic, Norman will see his new work for the New York Philharmonic, entitled Split, premiere on December 10th, performed by pianist Jeffrey Kahane. Picking up on ludic cues from Switch, Split also involves a game-like architecture of percussive activation of large swaths of instruments—a feature that Norman culls from our saturated world of media, games, and screens.

Clearly, Norman's vibrant, interactive musical style has resonated strongly with the contemporary orchestral landscape. In 2015, he has been one of the top ten most performed living composers in America, with nineteen performances of his orchestral works alone. And, only a few years after his Companion Guide to Rome was a Pulitzer Prize Finalist, Norman's Play, recently recorded by the Boston Modern Orchestra Project, has been nominated for a Grammy Award for Best Contemporary Classical Composition. Of course, Play has already shown up on year-end top-ten lists from NPR, Rhapsody, and others; Alex Ross and other critics have hailed it as "a modern classic". 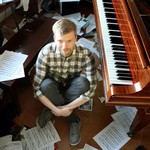