PSNY is happy to announce that two new works by Ann Cleare, one of which is in two arrangements, are newly available this week on PSNY.

Cleare's work has often explored concepts of presence, becoming, and immanence, dwelling in sound-worlds made manifest by her maserful use of instruments and electronics. Cleare's Inner, in a new version for violin and piano, "probes the subcutaneous space within sound", positing sound as a body with porous boundaries. Inspired by French philosopher Gilles Deleuze, Cleare writes: "the internal is given a multidimensional quality, fragmenting the outer surface", a metaphor for her compositional interplay between instruments and sound. 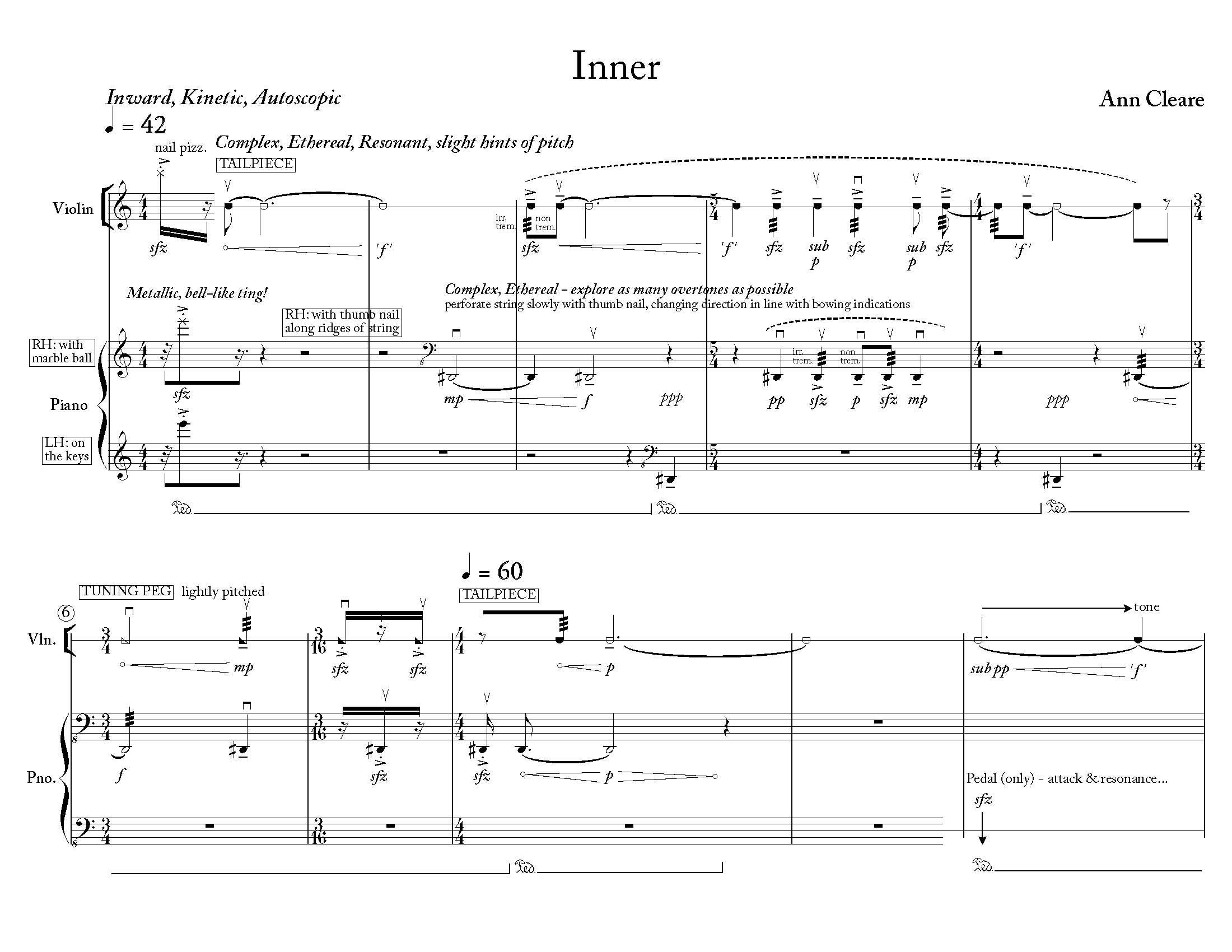 In Cleare's On Magnetic Fields, the ensemble is split up spatially and sonically on stage: two "whirling" ensembles, featuring violins, flank the left and right sides, while a separate ensemble of harp, piano, and percussion creates a "box of light" in the center. We have published both this version for full ensemble, as well as a version for two violins and loudspeaker. The interplay between the two magnetically-charged ensembles on either side and the "piercing, alien light" of the center ensemble forms the basis of the composition. Check out a recording excerpt below.

Mario Diaz de Leon is a composer who explores the dark: dark emotion, dark affect, dark sounds. Equally at home in the world of instrumental composition as he is with metal, noise, and ambient drone music, Diaz de Leon truly embodies the spirit of the collaborative musician of today. In addition to composition, Diaz de Leon also performs under the alias Oneirogen, and has collaborated and performed with Nate Young of the legendary noise outfit Wolf Eyes. These collaborative and genre-crossing projects bring Diaz de Leon into a special category of "composer-performer" that knows no boundaries—neither aesthetic nor social.

It's no surprise that Diaz de Leon would be connected to John Zorn, New York's Avant-Garde ringleader; his first album Enter Houses Of was released on Zorn's record label, Tzadik, and features performances from members of the International Contemporary Ensemble. Diaz de Leon has continued his close relationship with ICE to produce his latest album, The Soul is the Arena, recently released on Denovali Records. Check out the first track, Luciform, below.

Writing in Pitchfork, Seth Colter Walls calls the album "the best introduction to his refined feel for instrumental extremity"; in Luciform, Claire Chase's relentless virtuosity rubs up against bass-heavy electronic textures. (Make sure to listen with headphones!). Along with Luciform, the title composition of this album, The Soul is the Arena, will be available for immediate download from PSNY.

ICEstorm: Joshua Rubin - Mario Diaz de Leon: The Soul is the Arena from ICE on Vimeo.

If you're lucky enough to live in the New York area, Diaz de Leon will be performing the album in its entirety at The Stone on August 11th, along with ICE members Claire Chase, Joshua Rubin and Kivie Cahn-Lipman. This concert kicks of Diaz de Leon's residency at The Stone: a week of concerts that will include collaborations and performances with cellist/noise musician MV Carbon, the violin duo String Noise, Bloodmist, and more. Get there early—the first 50 audience members will receive a free copy of the CD.

Later in the week, on August 15th, the Mivos Quartet will perform Moonblood and Psalterion, two string quartets, and pianist Stephen Gosling will perform Cosmogony, a new work for piano and electronics. More information about the entire week of concerts can be found here.

Keep an eye out for The Soul is the Arena, as well as all five compositions from Enter Houses Of on PSNY soon!

Composer Ann Cleare has had a spate of successful concerts recently, featuring premiere performances of her work I should live in wires for leaving you behind by Yarn/Wire, who commissioned Cleare to write it. This piece, for prepared piano and percussion, was premiered at ISSUE Project Room on October 9th, and performed again at Rensselaer Polytechnic Institute's EMPAC on November 15th. I should live in wires for leaving you behind begins with all performers 'inside' the piano, playing carefully arranged crystal bowls set inside the piano; it gradually moves out to a second 'outside' space, where the instruments called for include modified salad spinners, flower pots, and more. Both the sonic and the visual coordination of this piece make it a stand-out for Yarn/Wire, and a successful collaboration with Cleare.

Other recent performances include anchor me to the land, performed in Darmstadt, Germany by the Curious Chamber Players. This premiere was the fruit of Cleare's Staubach Honorarium, a prestigious composition prize awarded each year to composers for premieres at the Darmstadt International Summer Course for New Music.

Just down the road from Darmstadt in Mannheim, Cleare saw the premiere of another new work, luna (the eye that opens the other eye), for solo alto saxophone, which was performed by Patrick Stadler at the Popakademie (University of Popular Music).

Farther south in Karlsruhe, Cleare's eyam iv (Pluto's farthest moons) was premiered by Richard Craig and The Experimental Ensemble at the IMATRONIK Fesitval of Electronic Music. eyam iv, part of Cleare's eyam series for contrabass wind instruments, pairs a contrabass flute with a electronically spatialized ensemble of winds, strings, and percussion. The piece was commissioned and written as part of a research residency at The EXPERIMENTALSTUDIO of the SWR.

Cleare was also featured in the Bludenzer Tage zeitgemäser Musik (Bludenzer Days of Contemporary Music) Festival in Vienna. Her work, luna | lithe | lair was commissioned and premiered by Ensemble Mosaik, a new music ensemble based in Berlin, conducted by Enno Poppe.

Check out her work Dorchadas, for ensemble, which is also available from PSNY!