Sound Icon, Boston's acclaimed contemporary music sinfonietta, gives the East Coast premiere of Ken Ueno's Zetsu on November 12th at Boston University's CFA Concert Hall, presented by Boston University's Center for New Music. The performance features violinist Gabriela Diaz, for whom Ueno originally wrote this "person-specific" piece, and who premiered the piece along with the San Francisco Contemporary Music Players in February 2015. Zetsu is inspired by the ceramics of Nishida Jun, whose works are in the collection of Boston's Museum of Fine Arts. Like Jun's ceramics, Zetsu attempts to analogize the creation of a protean form of music, which Ueno accomplishes by crafting both new ways of playing instruments and new instruments themselves, such as percussion idiophones using microtonal tunings specific to the harmonic spectrum of the piece, and the "Hookah Sax"—a saxophone augmented with a 7' length of plastic hookah tubing:

Ueno writes that, formally, the piece "pushes and pulls gestures and textures to extremes: the slowly evolving shimmer in the solo violin of the opening gives way to discrete, rhythmically clarified polyphony for the ensemble. The soloist returns with an intricate part ranging widely in articulation and tessitura, microtonal contours lending an organic, improvised, very human intensity." 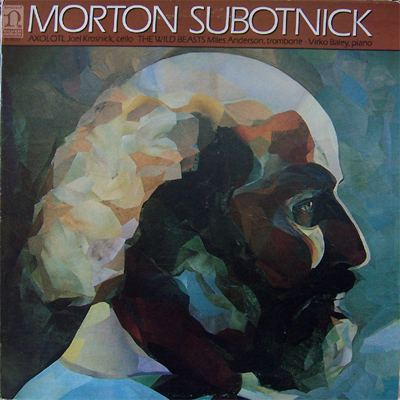 For the first time ever, the music of Morton Subotnick – complete digital editions, with scores, parts, software, and samples – are available for immediate download. Subotnick, widely considered one of the first and most eloquent voices of electronic music, has made six of his works available through Project Schott New York. Though these works have been available from Schott in the past, the PSNY edition allows for immediate download of all materials, including standalone software applications, and patches for Max/MSP and Ableton Live.

The works include Axolotl, A Fluttering of Wings, In Two Worlds, The Key to Songs, Passages of the Beast, and Then and Now and Forever. More information and excerpts after the jump...