Alex Mincek: "On The Outside, Looking Out"

PSNY Composer Alex Mincek has recently been featured by the journal Music & Literature. Writer George Grella moves seamlessly from Mincek's Pendulum series to his relationship with jazz to his admiration of fellow PSNY composer Alvin Singleton.  Grella recalls his first encounter with Mincek's music—a performance of Pendulum VII at Zankel Hall. After beginning with a "skronking" saxophone,

"[T]hen, like a pendulum, the piece swung into a different, but related, structural concept. The level of activity remained the same, but the sense of time and motion was entirely different. The music was like a frothing suspension, holding still via sustained pitches, but simmering through tremolos, rebowings, flutter-tonguing. There was the feeling that the music contained some sort of strange, awesome power." 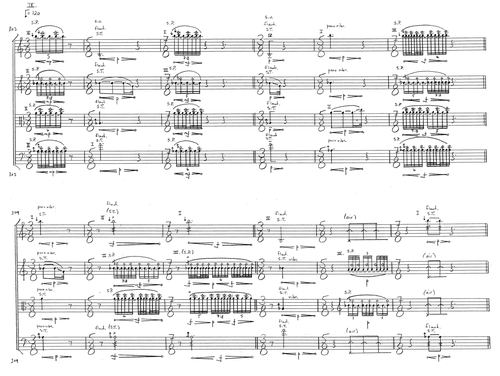 (Other works in the Pendulum series available on PSNY include Pendulum III, for alto saxophone and piano, and Pendulum VI: Trigger for piano four-hands and two percussionists.)

Be sure to check out the full feature at Music & Literature!