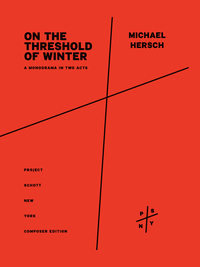 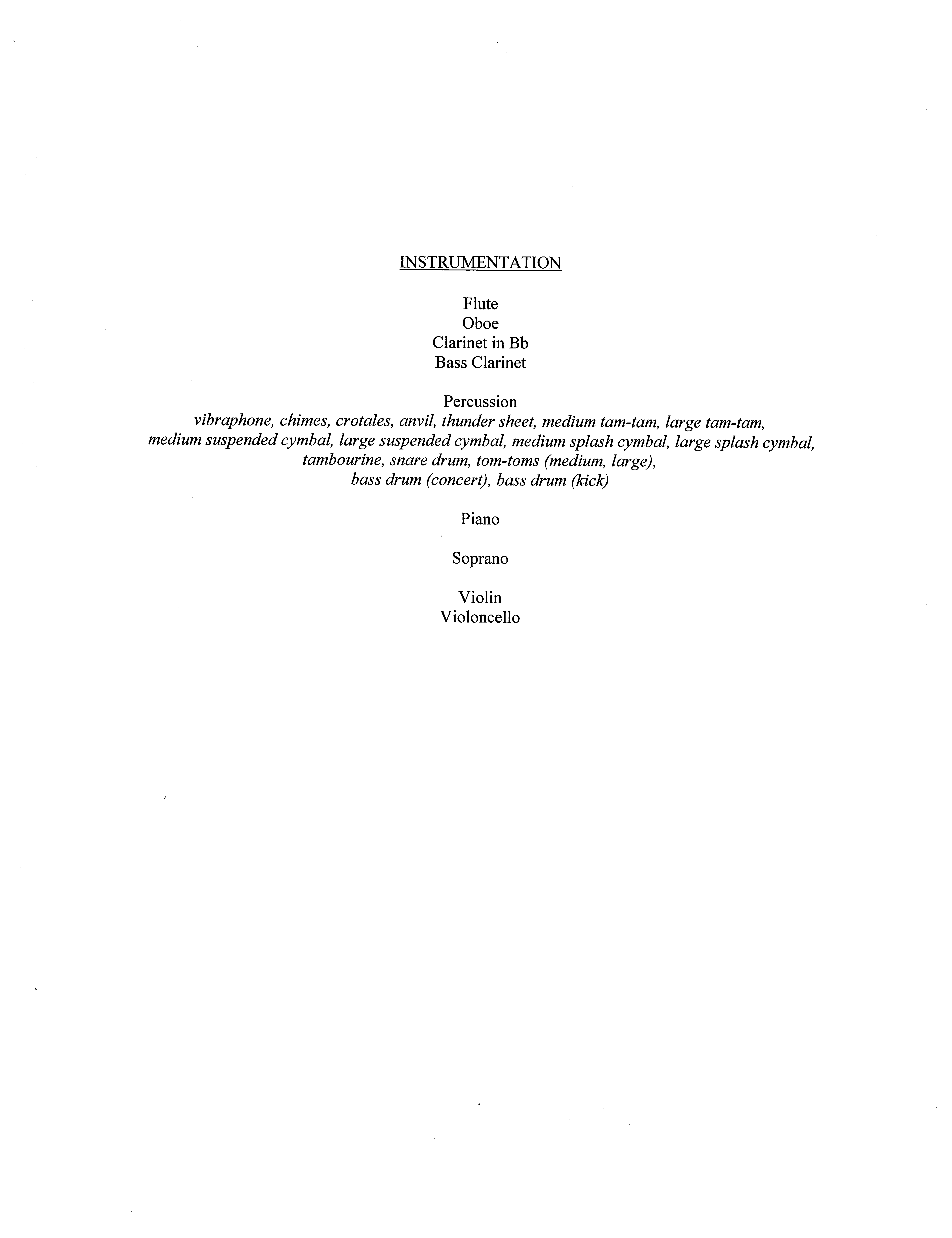 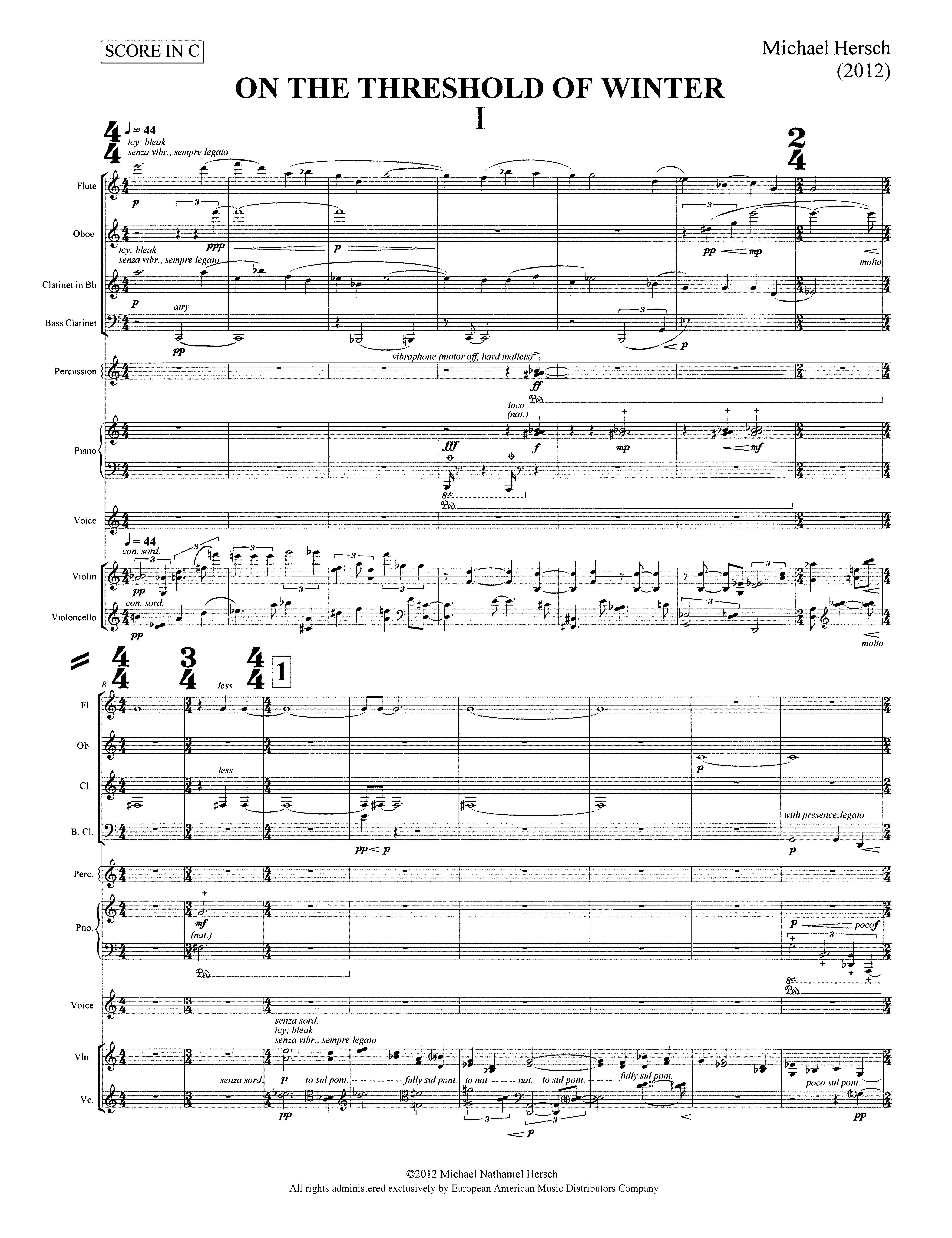 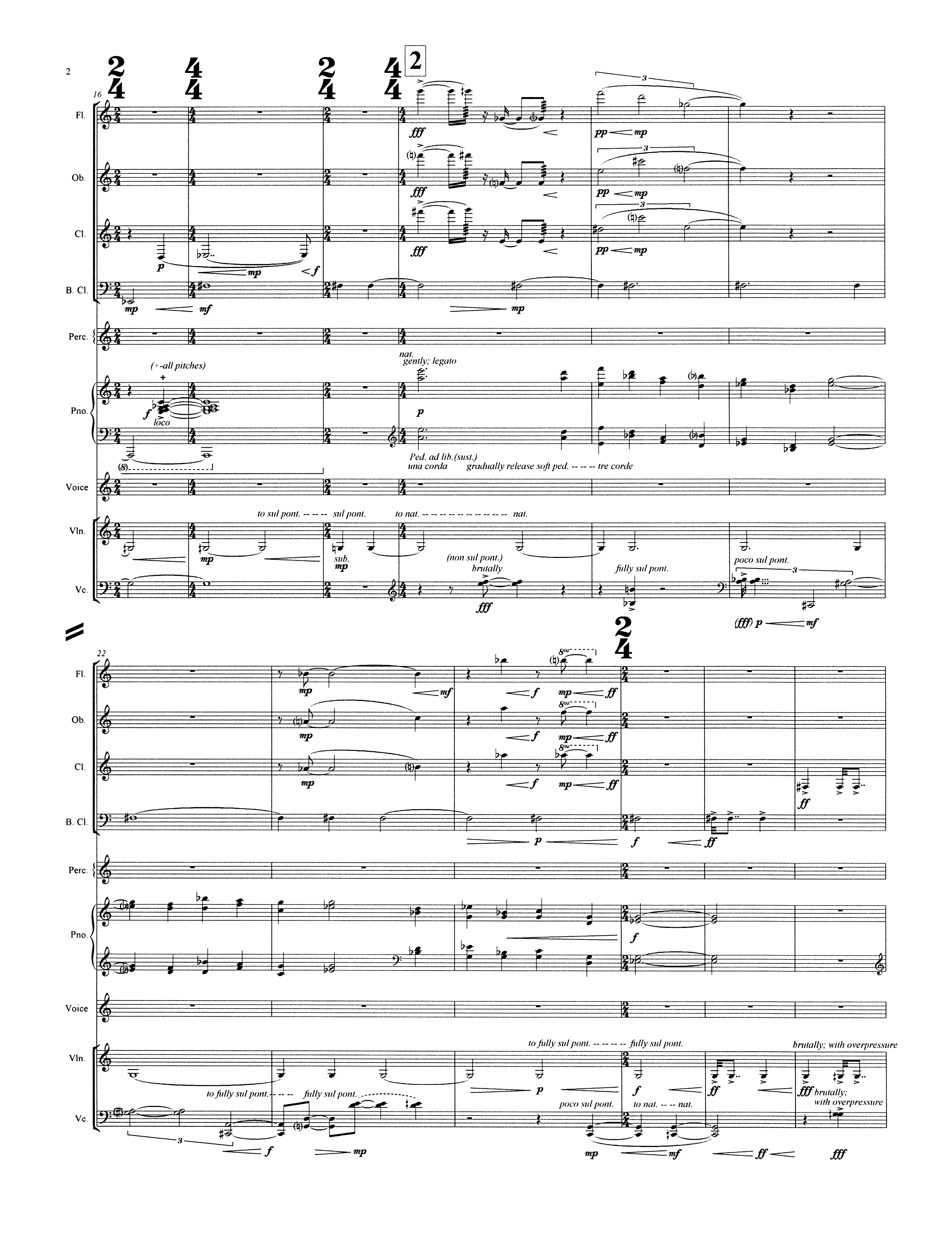 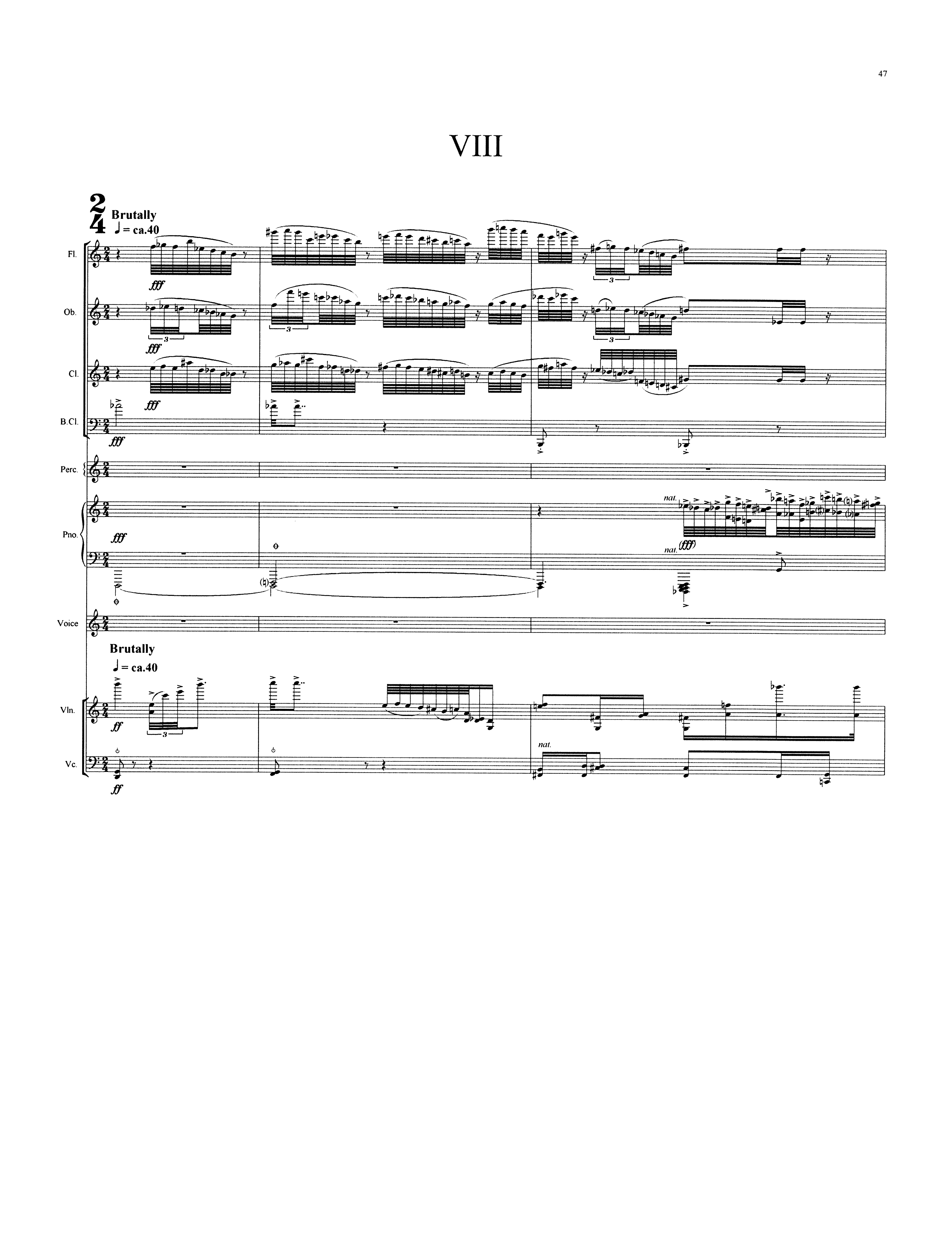 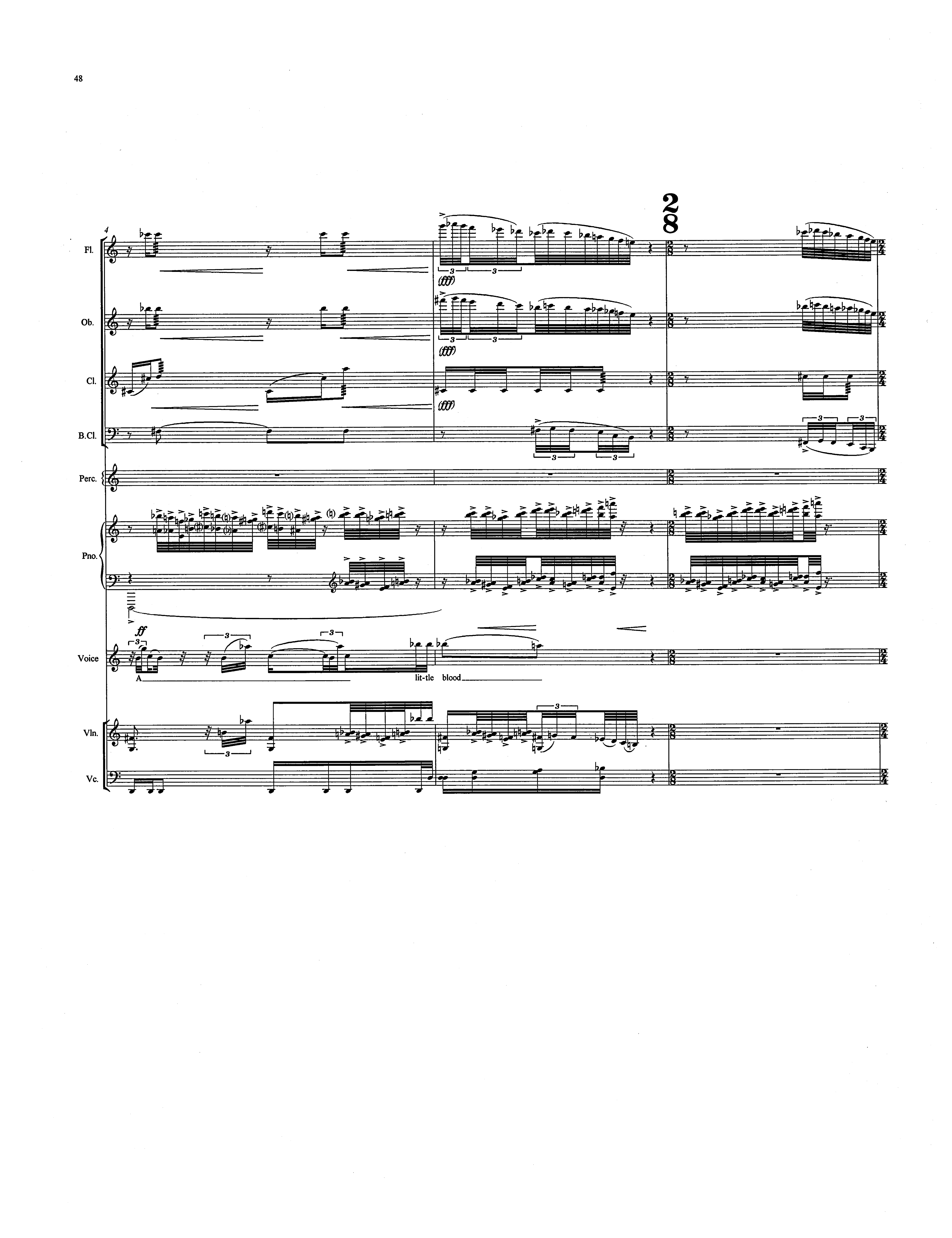 On the Threshold of Winter

a monodrama in two acts

FIGHTING AGAINST THE ETERNAL NIGHT
by Andrew Farach-Colton

In 1996, Marin Sorescu was nominated for a Nobel Prize. Later that year he was diagnosed with liver cancer. A literary hero in his native Romania, Sorescu spent the last five weeks of his life in hospital. He kept writing, sometimes completing several poems in a single day; the last was written just a day before his death on December 8, 1996. These were collected, published and later translated into English as The Bridge. Sorescu dedicated the book “to those who suffer.”

Michael Hersch first encountered The Bridge in 2010, a dark period in the composer’s life:

“My closest friend received a cancer diagnosis in her late 30s and died of the disease a few years later. The experience of witnessing what she went through is something far from resolved in me. The horror of the entire thing still haunts. Most unexpectedly, while she was in the midst of her illness, I received a cancer diagnosis myself. For that period, while I underwent my own surgeries, radiation, indignities . . . the roles were reversed, and she was there for me. Ultimately, I was left cured to go on with my life, and she was gone.”

For years, Hersch had wanted to write a work for the stage and had been searching for an appropriate vehicle. “With The Bridge,” he says, “I knew I had finally found the material I wanted to work with.” He created his own libretto, based entirely on Sorescu’s published verses, then began to compose the music—in secret at first, and with no commission or even the most vague plan for a production. On the Threshold of Winter was completed in 2012.

Although Sorescu’s book resembles a diary in its chronological presentation, it is less a record of events or impressions but rather a poetic distillation of fears, prayers, memories, and fantastical visions that vividly convey the author’s increasing desperation and despair. And yet a drama does unfold in these poems, and one that’s gripping in its grim authenticity.

It is a wholly interior drama, however. Indeed, one of the most unsettling aspects of The Bridge is its feeling of near-total isolation. Sorescu makes only passing mention of his mother and his doctors. In one of the longest poems, “At the Front,” he recounts a dreadful war story told to him by his brother—but it is a remembered, second-hand tale. Then there is his wife, Virginia, who appears as no more than a faint shadow, yet without her daily assistance as scribe, typist, proof-reader, and editor, the poems might never have been written. She is mentioned outright in but one poem, “The Host of Hell” (omitted in Hersch’s libretto), where Sorescu displays his finely-honed gallows humor: “My wife reads me prayers and the Book of Job / To buck me up.”

On the Threshold of Winter is scored for soprano and an ensemble of eight musicians playing flute, oboe, Bb clarinet, bass clarinet, piano, violin, cello, and percussion (including drums, chimes, crotales, cymbals, gongs, vibraphone, anvil). Because there is only one singing role -- like Schoenberg’s Erwartung, Poulenc’s La voix humaine and Peter Maxwell Davies’ Eight Songs for a Mad King -- Hersch describes his work as a monodrama. This categorization is entirely correct, though there is a crucial difference: In the three other works, the singer is communicating with other characters, real or imaginary, though unseen. Hersch gives us a true soliloquy; if his singer is addressing anyone at all, it is us.

There are two acts made up of 17 and 14 sections, respectively. For the most part, these divisions do not correspond to individual poems or their chronological presentation in The Bridge. Some poems are broken into fragments and interleaved with others; some are spread over several consecutive sections. Hersch does, however, begin with the earliest, “Why am I the one who must enter this hospital?” (placed 16th in The Bridge, but one of two poems written in a Paris hospital a month before the others, and later inserted into the published collection), and ends with the last: “I am reminded of all our dogs.”

Musically, the work encompasses markedly disparate elements—fragile textures and violent gestures, tonally-inclined lyricism and barbed dissonance—that cohere into a unified expression of physical and spiritual suffering. The composer has described a few of the lyrical passages as lullaby-like, though that’s not entirely indicative of their expansive actual range. “To fight against the eternal night” (Act I, section 6) does have the character of a lullaby, though a sombre one, as does the beginning of “On a speck of dust” (Act I, section 12). But “I battled proudly” (Act II, section 19) sounds more like a distorted military song, and “The light in the eyes has dimmed” (Act II, section 28) is an outright funereal dirge. The crucial point is that nowhere do any of these lullabies/dirges/songs/interludes—whatever one wants to call them—offer solace or even a mere glimmer of nostalgic charm or naiveté. Rather, they suggest a slow but restless, relentless motion that fits with translator Adam J. Sorkin’s description of The Bridge as “a dance of death.”

Hersch paints Sorescu’s poetic images in vivid detail. The scoring is often quite spare, and his palette consists predominantly of dark colors, though the shadings are extremely fine.  In the instrumental introduction that comprises most of the opening section, for instance, angular, aching phrases evoke the bleak hospital setting so precisely, one can almost see the color of the walls. “I watch with great interest” (Act I, section 7) begins with a stark duet for soprano and flute. Cold shivers punctuate the key line “On the threshold of winter,” in the middle of Act I. A cacophonous choir of birds seems to accompany “Sometimes I find myself watching in wonder / The tops of the birch trees” (Act I, section 14). Delicate strands at the beginning of “A spider’s thread hangs from the ceiling” (Act II, section 23) are intricately knit, and support an almost ecstatic delivery of the verse (from the aforementioned poem in Act I): “Set me spinning to roam the universe / A fiery ember hissing through the ether / Emitting light, emanating happiness.”

The soprano is instructed to scream “Happiness!” at the end of that section, just one of many demands that make the role extraordinarily taxing. First and foremost is the plain fact that she is onstage and singing for almost two hours. Much of the writing lies low in the voice—one of the ways Hersch represents sickness and fatigue—but there are many stretches of high-lying passages, too. Myriad rhythmic complexities and challenging melodic angles and curves require vocal dexterity and exceptional musicianship. And then there are the dramatic requirements, which are similarly daunting in a work that is essentially one long death scene.

Sorescu wants desperately to show us the harsh reality of dying without any romanticized notion of hope or consolation. The Bridge is the genuine testament of a struggle and reads almost like a deathbed diary. But it is not a diary, it is a work of art. And through it, Hersch has found a vehicle to express his own desire to depict human suffering with unflinching honesty.

This honesty may make On the Threshold of Winter seem as confrontational as it is confessional—not that Hersch seeks to shock, for that would imply a layer of artifice that is utterly absent from his music. He simply asks that we examine emotions and experiences that are unsettling or upsetting; he implores us to look with him and not turn away. In so many of his works, one feels this same piercing gaze into the dark corners of human existence. His instrumental pieces—even those with poetic or visual connections, like the vast piano cycle The Vanishing Pavilions (2005) or Images from a Closed Ward (2010) for string quartet—give the listener some leeway. One can approach them as abstract works (and, in essence, they are), which cannot dilute their potency, but does allow one to create distance. On the Threshold of Winter, on the other hand, is immersive, and thus inescapably harrowing.

Ultimately, our consolation is found in Hersch's art itself: in the richness of his imagination, and the precision and concision of his musical language. But, most of all, it is in his humanity, which shines like a beacon through the score's darkest page.

***
Andrew Farach-Colton is a regular contributor to Gramophone, BBC Music Magazine, Opera News, and The Strad. His essays and analytical notes have appeared in the program books of the New York Philharmonic, BBC Proms, and the San Francisco Opera, as well as in CD booklets of Decca and Harmonia Mundi recordings.

Score and Parts (Digital)
Score and part PDF files are delivered via email upon receipt. Any electronic files associated with the work are included with every purchase.

Full Score (Digital)
A PDF file of the full score is delivered via email upon receipt.

Full Score (Print)
A print edition of the score ships to the customer's address upon receipt.

Parts (Digital)
A PDF file of the part(s) is delivered via email upon receipt.

Parts (Print)
A print edition of the part(s) ship to the customer's address upon receipt.

Solo Instrument Score (Digital)
A score PDF file is delivered via email upon receipt. Any electronic files associated with the work are included with every purchase. An email containing a link to download the electronic files is sent to the customer's email address.

Full Score/Performance Score (Digital)
The full score serves as a performance score for all players. A score PDF file is delivered via email upon receipt. Any electronic files associated with the work are included with every purchase. An email containing a link to download the electronic files is sent to the customer's email address.

Choral Score (Digital)
A PDF file of the choral score is delivered via email upon receipt. The set is priced to allow multiple copies of the PDF to be printed for performance by the purchasing organization only.

Full Score and Solo Part (Print)
A print edition of the score and solo part ships to the customer's address upon receipt.