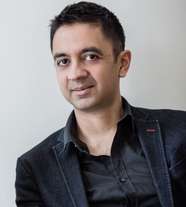 Vijay Iyer has captured the ears of critics and listeners like only a handful of the most elite jazz pianists since McCoy Tyner, Cecil Taylor, or Misha Mengelberg initially burst onto the scene. There's no other single player who sounds even remotely like him, few who can match his inventive and whimsical sense of play or seriousness, and absolutely nobody who presents the stunning, highly intelligent music he dishes out… – All Music Guide

In March 2014, Iyer released Mutations, his “spectacular debut on the ECM label” (ABC Spain), featuring his original music for piano, string quartet and electronics. The first album to document his chamber works, Mutations “extends and deepens his range... showing a delicate, shimmering, translucent side of his playing” (Chicago Tribune). His previous release,Holding It Down: The Veterans’ Dreams Project (2013), is his third collaboration with poet Mike Ladd, based on the dreams of veterans of color from America’s wars in Iraq and Afghanistan. It was hailed as #1 Jazz Album of the Year by the Los Angeles Times. Earlier albums include Accelerando (2012) and Historicity (2009), both featuring the Vijay Iyer Trio (Iyer, piano; Marcus Gilmore, drums; Stephan Crump, bass).

Iyer’s recent concert works include Time, Place, Action, a string quartet premiered by the Brentano String Quartet in 2014, as well as Bruits for woodwind quintet and piano (premiered by Cory Smythe and the Imani Winds), Dig the Say (premiered by the Brooklyn Rider String Quartet), and RADHE RADHE: Rites of Holi, a multimedia performance piece and collaboration with filmmaker Prashant Bhargava commissioned by Carolina Performing Arts in commemoration of the centenary of Stravinsky's The Rite of Spring. This season, Iyer returns to BAM’s Next Wave Festival with a program titled “Vijay Iyer: Music of Transformation” featuring the world premiere of a solo piece for piano, commissioned by BAM; his recent suiteMutations I-X for piano, electronics and string quartet; and a performance of RADHE RADHE: Rites of Holi performed by Iyer and the International Contemporary Ensemble (ICE).

A polymath whose career has spanned the sciences, the humanities and the arts, Iyer received an interdisciplinary Ph.D. in the cognitive science of music from the University of California, Berkeley. He has published in Journal of Consciousness Studies, Wire, Music Perception, and JazzTimes, among others, as well as in the anthologies Arcana IV, Sound Unbound and in the forthcoming Oxford Handbook of Critical Improvisation Studies. Iyer has taught at Manhattan School of Music, New York University, and the New School, and he is the Director of The Banff Centre’s International Workshop in Jazz and Creative Music. Iyer recently finished a multi-year residency with San Francisco Performances. In 2014 he began a permanent appointment at Harvard University’s Department of Music, as the Franklin D. and Florence Rosenblatt Professor of the Arts. Vijay Iyer's concert works are published exclusively by Schott Music Corporation worldwide.