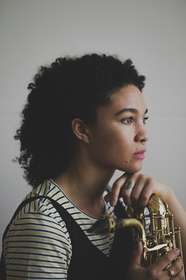 Washington’s music has been performed across the United States and beyond. Upcoming projects include a new work for the Los Angeles Chamber Orchestra, and a full-length opera for Long Beach Opera. Recent projects include a commission from the Chicago Symphony Orchestra to arrange Julius Eastman’s Joy Boy, premiered in spring 2019, and a new recording of a chamber version of Joy Boy for wild UP new music for their upcoming album, Eastman vol. 2: Stay On It. Nine Mothers, a new concerto for Eighth Blackbird and the Cincinnati Symphony, premiered March of 2022,  written by all three members of her composer collective, Kinds of Kings.