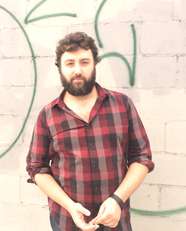 Scott Wollschleger (b. 1980, Erie, PA) received his Masters of Music in composition from Manhattan School of Music in 2005, where he studied with Nils Vigeland. An avid supporter of collaboration and experimental creativity, Mr. Wollschleger was the Artistic Director of Red Light New Music, a 501c(3) non-profit organization dedicated to presenting and crafting contemporary music.

Mr. Wollschleger’s music has been widely performed in the United States and around the world, with recent performances throughout Belgium, Germany, Switzerland, Russia, in addition to performances in San Diego, Los Angeles, Charlotte, and the greater New York City and Brooklyn areas.

With a strong emphasis on solo and chamber works, his musical ideas often explore an acute sense of synesthesia and color in sound, in addition to the a-temporal and discontinuous nature of experience. He has received support from a variety of organizations including Meet The Composer, the American Music Center, and the Yvar Mikhashoff Trust for New Music. Current and upcoming commissions include writing new works for Mivos, Loadbang, Longleash Trio, The String Orchestra of Brooklyn and Red Light New Music.

In addition to his musical ideas, Mr. Wollschleger frequently delves into the philosophical writings of Deleuze, Guattari, Nietzsche, Heidegger, and maintains an ongoing collaboration with Deleuzian scholar Corry Shores. Their recently co-authored thesis, Rhythm without Time, was successfully presented at the London Graduate School’s academic conference, “Rhythm and Event,”. He currently resides in Brooklyn.