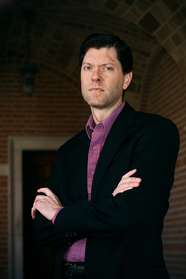 Pierre Jalbert (b. 1967) is one of the most highly regarded American composers of his generation, earning widespread notice for his richly colored and superbly crafted scores. Focusing primarily on instrumental works, Jalbert has developed a musical language that is engaging, expressive, and deeply personal. Among his many honors are the Rome Prize, the BBC Masterprize, the Chamber Music Society of Lincoln Center's Stoeger Award, given biennially "in recognition of significant contributions to the chamber music repertory," and a 2010 American Academy of Arts and Letters award.

Born in Manchester, New Hampshire, Jalbert grew up in northern Vermont; his family originally came from Quebec. He began piano lessons at the age of five, immersing himself in the classical repertoire. Growing up, he also heard French and English folk songs and Catholic liturgical music, gaining a deep respect for music that communicates powerfully with an economy of means.

Following undergraduate studies in piano and composition at Oberlin Conservatory, Jalbert earned a PhD in Composition at the University of Pennsylvania under principal teacher George Crumb. He won the Rome Prize in 2000-2001, and earned the BBC Masterprize in 2001 for his orchestral work In Aeternam, selected from among more than 1,100 scores by a jury that included Marin Alsop, Sir John Eliot Gardiner, and Sir Charles Mackerras. In Aeternam has been performed by the London Symphony Orchestra, the Budapest Symphony, the Seattle Symphony, the California and Hartford Symphonies, and the Orlando Philharmonic.

Jalbert has served as Composer-in-Residence with the Los Angeles Chamber Orchestra (2002-05), Chicago's Music in the Loft Chamber Music Series (2003), and the California Symphony (1999-2002).

Jalbert's compositions have been warmly embraced by the chamber music world as well, with performances by the Borromeo, Chiara, Enso, Jasper, Maia, and Ying String Quartets, and the violinist Midori. Upcoming chamber music commissions include pieces for the Emerson String Quartet, the Music from Copland House Ensemble, the Chamber Music Society of Lincoln Center, and the Arizona Friends of Chamber Music.

Jalbert's music is tonally centered, incorporating modal, tonal, and sometimes quite dissonant harmonies while retaining a sense of harmonic motion and arrival. He is particularly noted for his mastery of instrumental color: in both chamber works and orchestral scores, he creates timbres that are vivid yet refined. His rhythmic shapes are cogent, often with an unmistakable sense of underlying pulsation. Driving rhythms often alternate with slow sections in which time seems to be suspended.

Although his music is not programmatic, Jalbert has drawn inspiration from a variety of sources, including natural phenomena. He composed big sky after visiting Big Bend National Park in Texas, a place of starkly contrasting mountain, desert, and river environments. In Icefield Sonnets for string quartet, Jalbert created transparent, glassy textures in response to poems by Anthony Hawley about life in northern latitudes. The Baltimore Sun called Icefield Sonnets "fresh [and] dynamic," praising its "luminous colors and propulsive rhythms." Jalbert also set Hawley's texts directly in a 2005 song cycle of the same title, scored for soprano, baritone, and piano trio with percussion.

In Aeternam incorporates a fast, steady pulse that stems from Jalbert's experience of hearing his son's heartbeat for the first time during a pre-natal examination. In Aeternam is simultaneously a memorial for a niece who died at birth and a celebration of his son's arrival, mixing grief with hope in a compelling reflection on the fragility of existence. Wrote the San Francisco Chronicle, "The piece revealed powerful command of the orchestra and a vivid emotional range. In Aeternam made a listener eager to hear more."

Spiritual concerns are also central to Jalbert's work. Symphonia Sacra (2001), inspired by the splendor of Roman churches and cathedrals, incorporates plainchant melodies. Les espaces infinis, another orchestral score from 2001, is described by the composer as "a quiet meditation on the nature of time and space." The Los Angeles Times observed that "the piece, which begins and ends quietly, but achieves a resonant climax at its center, holds the listener through a canny blend of instrumental colors and combinations, chromatic but not dissonant, and ultimately pleasing."

Pierre Jalbert is Professor of Composition and Theory at Rice University's Shepherd School of Music in Houston, where he has taught since 1996. His music is published by Schott Helicon Music Corporation (New York) and the Theodore Presser Company.