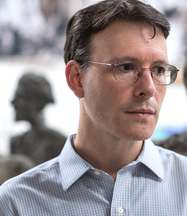 His work described by The New York Times as “viscerally gripping and emotionally transformative music ... claustrophobic and exhilarating at once, with moments of sublime beauty nestled inside thickets of dark virtuosity,” and called “one of the most fertile musical minds to emerge in the U.S. over the past generation” by Andrew Clark of The Financial Times, composer Michael Hersch is widely regarded as among today’s most gifted artists. Recent events and premieres include his Violin Concerto at the Lucerne Festival in Switzerland and the Avanti Festival in Helsinki; new productions of his monodrama, On the Threshold of Winter, in Chicago, Salt Lake City, and Washington D.C., and his I hope we get a chance to visit soon at the Ojai and Aldeburgh Festivals, where Mr. Hersch was a 2018 featured composer.

Over the past several years, Hersch has also written new works for the Orpheus Chamber Orchestra, Ensemble Klang, the Alban Berg Ensemble Wien, and the Library of Congress. Other notable recent events include European performances by the Kreutzer Quartet of Images from a Closed Ward in the U.K. and Sweden, a recording of the work by the acclaimed FLUX Quartet, a work for solo violin commissioned by the New York Philharmonic, premiered at the orchestra’s Biennial in 2014. At the 2019 Wien Modern Festival, Mr. Hersch’s 12-hour cycle, sew me into a shroud of leaves, a trilogy of works which occupied him between 2001-2016, will receive its world premiere. During the 2019/20 season, Mr. Hersch will be the Composer-in-Residence with the Camerata Bern in Switzerland.

In recent years, Hersch has worked closely with violinist Patricia Kopatchinskaja, the violinist commissioning both his Violin Concerto, which premiered in 2015, and his chamber work ... das Rückgrat berstend, which premiered at New York City’s Park Avenue Armory during the autumn of 2017. She recently recorded the concerto with the International Contemporary Ensemble (I.C.E.), and the duo with cellist Jay Campbell.

Notable past performances include Night Pieces, commissioned and premiered by the Cleveland Orchestra, and a song cycle for baritone and piano, Domicilium, commissioned and premiered by Thomas Hampson and Wolfgang Rieger on San Francisco Performances. Hersch’s second piano concerto, along the ravines, was given performances with the Deutsche Radio Philharmonie and the Seattle Symphony Orchestra, and as part of the George Enescu International Festival in Romania (Timisoara and Bucharest). Mr. Hersch’s Symphony No. 3 was premiered at the Cabrillo Contemporary Music Festival Orchestra, a festival commission, and his A Forest of Attics, commissioned for the Network for New Music’s 25th anniversary season, was selected as one of the year’s most important classical music events by The Philadelphia Inquirer. The paper said of the work, “A Forest of Attics threw a Molotov cocktail into the concert: Everything before it paled in comparison ... Hersch has written some towering works in recent years; this is yet another.”

Also a pianist, noted for his “astounding facility at the keyboard” (International Piano), Mr. Hersch has appeared around the world including appearances at the Aldeburgh Festival, the Festival Dag in de Branding in the Netherlands, the Warhol Museum, the Romaeuropa Festival, the Ojai Festival, the Phillips Collection in Washington D.C., Cleveland’s Reinberger Chamber Hall, the Festival of Contemporary Music Nuova Consonanza, the Network for New Music Concert Series, the Left Bank Concert Society, Festa Europea della Musica, St. Louis’ Sheldon Concert Hall, and in New York City at Merkin Concert Hall, the 92nd St. Y - Tisch Center for the Performing Arts, and Carnegie Hall’s Weill Recital Hall, among others.

Born in Washington D.C. in 1971, Michael Hersch came to international attention at age twenty- five, when he was awarded First Prize in the Concordia American Composers Awards. The award resulted in a performance of his Elegy, conducted by Marin Alsop in New York’s Alice Tully Hall. Later that year he became one of the youngest recipients ever of a Guggenheim Fellowship in Composition. Mr. Hersch has also been the recipient of the Rome Prize, the Berlin Prize, the Goddard Lieberson Fellowship and Charles Ives Scholarship from the American Academy of Arts & Letters, and the President’s Frontier Award from the Johns Hopkins University, among other honors.