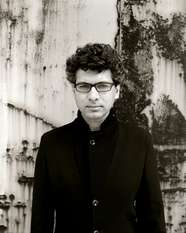 Recipient of the Luciano Berio Rome Prize from the American Academy in Rome, Keeril Makan has also received awards from the American Academy of Arts and Letters, the Fromm Foundation, the Gerbode Foundation, the Hewlett Foundation, Meet the Composer, the Aaron Copland House, the Utah Arts Festival, and ASCAP. Described by The New Yorker as “an arrestingly gifted young American composer,” his work has been commissioned by the Bang on a Can All-Stars, American Composers Orchestra, Harvard Musical Association, and Carnegie Hall, among others. Makan's work has been featured at the Other Minds Festival in San Francisco and the MATA Festival in New York, and internationally at the Gaudeamus Festival in the Netherlands, Musica Nova in Finland, and Voix Nouvelles in France. The Chamber Music Society of Lincoln Center, the International Contemporary Ensemble, the Scharoun Ensemble Berlin, the Sonar Quartett, the New Juilliard Ensemble, percussionist David Shively, guitarist Seth Josel, and others have performed his music. He has been a fellow at Yaddo, Ucross, Civitella Ranieri, the Oberpfälzer Künstlerhaus, and Djerassi. His first CD, In Sound, was released on the Tzadik label with performances by the Kronos Quartet and Paul Dresher Ensemble. Starkland has released his second CD, Target, with performances by Either/Or, the California E.A.R. Unit, and soprano Laurie Rubin. His music has also been recorded on Innova and Carrier Records.

Makan was raised in New Jersey by parents of South African Indian and Russian Jewish descent. After training as a violinist, he received degrees in composition and religion from Oberlin and completed his PhD in composition at the University of California–Berkeley. Outside the US, he spent a year in Helsinki, Finland, at the Sibelius Academy on a Fulbright grant. After receiving the George Ladd Prix de Paris from the University of California, he studied for two years in Paris, France. Makan is a member of the professorial faculty at the Massachusetts Institute of Technology.