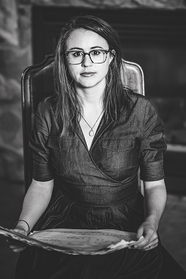 The music of composer Katherine Balch (b. 1991) captures the magic of everyday sounds, inviting audiences into a sonic world characterized by imagination, discovery, and a rich diversity of styles. Katherine is often inspired by literature, nature, and science, aptly reflected in the San Francisco Chronicle’s description of her as “some kind of musical Thomas Edison – you can just hear her tinkering around in her workshop, putting together new sounds and textural ideas.”

Katherine’s facility in elevating ordinary sounds through large-scale orchestration and dramatic narrative arcs has led to commissions and performances with the Los Angeles Philharmonic, London Sinfonietta, Orchestra Philharmonique de Radio France, Ensemble Intercontemporain, and the symphony orchestras of Boston, Minnesota, Oregon, Albany, Indianapolis, and Tokyo. She has been featured on IRCAM’s ManiFeste, Fontainebleau Music Festival, and Festival MANCA in France, Suntory Summer Arts and Takefu Music Festival in Japan, and the Aspen, Norfolk, Santa Fe, and Tanglewood music festivals in the United States.

Nominated by violinist Hilary Hahn, Katherine was just announced as the recipient of the Dallas Symphony Orchestra’s 2020 Career Advancement Award. She has also been honored by ASCAP, BMI, the American Academy of Arts and Letters, Chamber Music America, and Barlow Foundation, and has served as composer-in-residence for Young Concert Artists and the California Symphony. In 2021, she will be in residence at the American Academy in Rome as the Elliot Carter Rome Prize Fellow.

Deeply committed to developing inclusive, engaging pedagogical practices that empower students through creative music-making, Katherine currently teaches composition and orchestration at Mannes School of Music. She a doctoral candidate at Columbia University and an alumna of the Yale School of Music. Her chamber works are published by Schott PSNY.

Katherine documents her lived experiences on the page, with each composition serving as a diary of what has captivated her curiosity. When she’s not creating, she’s collecting inspiration from the nearest botanical gardens, Rimbaud’s poetry, or her feline sidekick, Zarathustra.