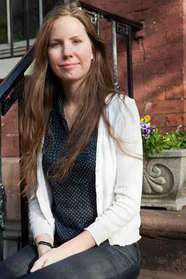 Kate Soper (b.1981) is a New York City-based composer and performer with a diverse background. Her current compositional interests include the integration of drama and rhetoric into musical structure, the transformation of visceral gestures in and out of time, and the potential of the human voice to communicate abstractly (or not). Her music, described as "exquisitely quirky" by The New York Times, has been played by ensembles such as the American Composers Orchestra, the BUTI Wind Orchestra, the Nouvel Ensemble Modern, Ensemble Linea, Dinosaur Annex, the Ostravska Banda, the Second Instrumental Unit, and the Due East Ensemble, among others. She has received awards from the Fromm Foundation, the American Academy of Arts and Letters, the Music Theory Society of New York State, and ASCAP, and has been commissioned by Carnegie Hall, the Nouvel Ensemble Modern, the Tanglewood Music Center, the Museum of Biblical Art, Yarn/Wire, and the Kenners. As a singer with experience in Western Classical and Indian Carnatik music, pop music, and improvisation, Kate performs frequently as a new music soprano in her own work and in the work of others. She received her D.M.A. in composition from Columbia University in 2011. She is Managing Director and vocalist of Wet Ink, a new music ensemble dedicated to performances of adventurous music across aesthetic boundaries.