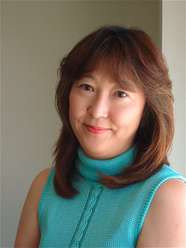 Karen Tanaka is an exceptionally versatile composer and pianist. She has composed extensively for both instrumental and electronic media. “Her music is delicate and emotive, beautifully crafted, showing a refined ear for both detail and large organic shapes…”, The New Grove Dictionary of Music and Musicians.

Her love of nature and concern for the environment has influenced many of her works, including  Questions of Nature, Frozen Horizon, Water and Stone, Ocean, Tales of Trees, Water Dance and Our Planet Earth.

Born in Tokyo, she started formal piano and composition lessons as a child. After studying composition with Akira Miyoshi at Toho Gakuen School of Music in Tokyo, she moved to Paris in 1986 with the aid of a French Government Scholarship to study with Tristan Murail and work at IRCAM. In 1987 she was awarded the Gaudeamus Prize at the International Music Week in Amsterdam. She studied with Luciano Berio in Florence in 1990-91 with funds from the Nadia Boulanger Foundation and a Japanese Government Scholarship. In 1996, she received the Margaret Lee Crofts Fellowship at the Tanglewood Music Center. In 1998 she was appointed as Co-Artistic Director of the Yatsugatake Kogen Music Festival, previously directed by Toru Takemitsu.

In 2012, she was selected as a fellow of the Sundance Institute’s Composers Lab for feature film. Recently, she served as Lead Orchestrator for the BBC's TV series, Planet Earth II.

Her music is published by Chester Music in London (Music Sales), Schott Music New York (PSNY), and Editions BIM in Switzerland. Karen Tanaka lives in Los Angeles and teaches composition at California Institute of the Arts.