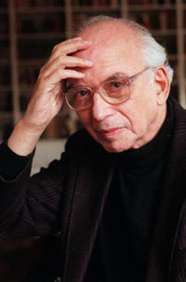 American composer George Perle remains one of the great unsung modernists, a writer of expressiveness and wit who has never let his idiosyncratic devotion to the 12-tone system stand in the way of lyricism or rhetorical clarity. - San Francisco Chronicle

The recipient of a Pulitzer Prize, a MacArthur Foundation fellowship, and an array of other major awards and honors, George Perle occupies a commanding position among American composers of our time. Born in Bayonne, NJ, May 6, 1915, he received his early musical education in Chicago. After graduation from DePaul University, where he studied composition with Wesley LaViolette, and subsequent private studies with Ernst Krenek, Perle served in the US Army during World War II. After the War, he took post-graduate work in musicology at New York University. His PhD thesis became his first book, Serial Composition and Atonality, now in its sixth edition.

Perle’s music is widely performed in this country and abroad. Major commissions have resulted in significant works, among them Serenade III (1983) for solo piano and chamber orchestra, choreographed by American Ballet Theater and nominated for a Grammy Award for its 1986 Nonesuch recording; Woodwind Quintet No. 4 (Pulitzer Prize, 1986); Piano Concerto No. 1 (1990), commissioned for Richard Goode during Perle’s residency with the San Francisco Symphony; Piano Concerto No. 2 (1992), commissioned by Michael Boriskin; Transcendental Modulations for Orchestra, commissioned by the New York Philharmonic for its 150th anniversary; and Thirteen Dickinson Songs (1978) commissioned by Bethany Beardslee. Recent works includeBrief Encounters (fourteen movements for string quartet), Nine Bagatelles for piano,Critical Moments and Critical Moments 2 for six players, and Triptych for solo violin and piano. A particularly notable portion of Perle’s catalog consists of pieces for solo piano, many of which have been recorded by Michael Boriskin on New World Records.

Perle's compositions have figured on the programs of Boston, Chicago, Philadelphia, New York Philharmonic, Royal Philharmonic, BBC, and other major orchestras in the US and abroad. Perle's works are recorded on Nonesuch, Harmonia Mundi, New World, Albany, CRI, Bridge and other labels. He was a frequent Visiting Composer at the Tanglewood Music Festival and Composer-in-Residence with the San Francisco Symphony.

Though Perle was above all a composer, the breadth of his musical interests led to significant contributions in theory and musicology as well. He published numerous articles in scholarly journals and seven books, including the award-winning operas of Alban Berg. As music critic Andrew Porter has written, “Perle’s renown as an analyst and scholar may have diverted some of the attention that should be given to his merits as a composer… What matters to listeners is his achievement: the vividness of his melodic gestures, the lively rhythmic sense, the clarity and shapeliness of his discourse and, quite simply, the charm and grace of his utterance.”