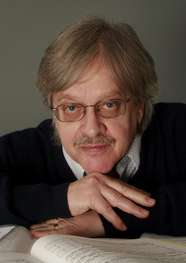 Composer Fred Lerdahl studied at Lawrence University, Princeton, and Tanglewood. He has taught at UC/Berkeley, Harvard, and Michigan, and since 1991 he has been Fritz Reiner Professor of Music at Columbia University. He is a member of the American Academy of Arts and Letters and has twice been finalist for the Pulitzer Prize in music. Among his other honors are the Koussevitzky Composition Prize, a Guggenheim Fellowship, and the Classical Recording Foundation’s Composer of the Year Award. Commissions have come from the Fromm Foundation, the Koussevitzky Foundation, the Spoleto Festival, National Endowment for the Arts, the Chamber Music Society of Lincoln Center, the Library of Congress, Chamber Music America, and others. Among the organizations that have performed his works are the New York Philharmonic, the Pittsburgh Symphony, the San Francisco Symphony, the Seattle Symphony, the Cincinnati Symphony, the Los Angeles Philharmonic, the American Composers Orchestra, the Saint Paul Chamber Orchestra, Orpheus, the Boston Symphony Chamber Players, the Chamber Music Society of Lincoln Center, eighth blackbird, Speculum Musicae, Collage, Antares, the Juilliard Quartet, the Pro Arte Quartet, the Daedalus Quartet, Ensemble XXI, Lontano, and the Venice Biennale. He has been in residence at the Marlboro Music Festival, IRCAM, the Wellesley Composers Conference, the American Academy in Rome, the Bowdoin Summer Music Festival, the Yellow Barn Music Festival, the Saint Paul Chamber Orchestra, and the Center for Advanced Study in the Behavioral Sciences. Lerdahl is also prominent as a music theorist. He has written two books, A Generative Theory of Tonal Music (with linguist Ray Jackendoff) and Tonal Pitch Space, both of which model musical listening from the perspective of cognitive science.