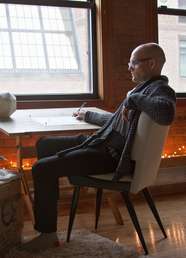 Davíð Brynjar Franzson, one of the leading Icelandic composers of his generation, currently resides in New York.

His works have been premiered by ensembles such as the the Icelandic Symphony Orchestra, the Arditti Quartet, Ensemble Adapter, Elision, Ensemble Surplus, Avanti!, eighth blackbird, Yarn/Wire, Either/Or, the Mivos Quartet and loadbang.

His music has been performed at festivals such as Transit, Huddersﬁeld Contemporary Music Festival, Ultraschall, Maerz Musik, Musika Nova, Nordic Music Days, Dark Days of Music in Reykjavik, and at the Internationals Musikinstitute Darmstadt, where he received a Stipendiumpreiz in 2008. In 2009, il Dolce far Niente received ﬁrst prize at the music 09 competition. In 2010, a Guide for the Dead through the Underworld, a one hour long collection of works, was staged at the Ultraschall Festival in Berlin by Ensemble Adapter.

Recordings of Davíð's music are available on Innova, Spektral and Smekkleysa labels, as well as on Carrier Records, which has recently released a new studio recording of a Guide for the Dead through the Underworld in collaboration with Deutschlandradio Kultur.

Davíð studied composition with Brian Ferneyhough and Mark Applebaum at Stanford University and Tristan Murail at Columbia University. He is a founding member of the Icelandic composer's collective s.l.a.t.u.r. and co-runs the record label Carrier Records with Sam Pluta and Jeff Snyder.