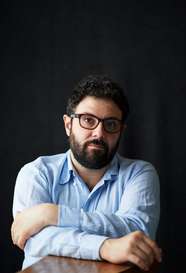 Christopher Cerrone (b. 1984, Huntington, NY) is a composer of dramatic, orchestral, chamber, and electronic music. Hailed as “a rising star” (The New Yorker) and “dangerously talented” (The New Haven Advocate), Cerrone's music has been descriped as “skillful and economical,” and “the program’s highlight” by the New York Times. Cerrone is a founding member and co-artistic director of Red Light New Music, and part of the Sleeping Giant composers collective.

His opera, Invisible Cities, was premiered in May 2011 to sold-out audiences in a joint production of the Italian Academy of Columbia University and Red Light New Music. The opera was first performed in May 2009 by New York City Opera as part of its annual VOX Contemporary American Opera Lab (Cerrone is the youngest composer to be featured). That same season, Invisible Cities was performed at the Virginia Arts Festival under the direction of Rhoda Levine, where Cerrone was a fellow at the John Duffy Composers Institute. In June 2009, Invisible Cities was also performed in the premiere season of the Yale Institute for Music Theatre, directed by Robin Guarino. Invisible Cities receives its Boston premiere in a concert production by Boston Metro Opera in June 2012 season.

Other recent projects include a new one-act opera, All Wounds Bleed for American Lyric Theatre (where Cerrone is now a second-year fellow of the Composer-Librettist Development Program) which was premiered in June 2011 at New York City’s Symphony Space; a New York Youth Symphony-commissioned violin concerto, Still Life, led by Ryan McAdams and performed by Hahn-Bin with the NYYS at Carnegie Hall; and a Carnegie Hall commission for Ensemble ACJW to be premired in February 2012. He is currently hard at work on a new piece for percussion and electronics for a consortium of 10 percussionists throughout the world that was commissioned by the American Composers Forum's JFund.

Beyond this, Cerrone’s concert works have been heard across the Europe and Asia, most recently by the Orchestre National de Lorraine, the Bang on a Can Summer Festival, the American Composers' Orchestra's SONiC Festival, the New Music Institute at the Hochschule für Musik, Berlin, the Yale Philharmonia, the Loadbang Ensemble, and throughout the world by Red Light New Music.

Cerrone has won awards and grants including the Charles Ives Scholarship from the American Academy of Arts and Letters, a residency at the Civitella Ranieri Foundation in Umbria, a 2011 Jerome Fund commission, 2011 and 2010 ASCAP/Morton Gould Young Composer Awards; as well as two CAP Grants (2009 and 2010) and a CAP Recording Grant (2010) from the American Music Center. He was recently named to NPR’s 2011 crowd-sourced selection of young composers “100 Composers Under 40.”

Cerrone is currently pursuing his doctorate at the Yale School of Music, where he studies with David Lang, Christopher Theofanidis, Martin Bresnick, Ezra Laderman, and Ingram Marshall. He has worked with composers including Pierre Boulez, Salvatore Sciarrino, Charles Wuorinen, Mark Adamo, Richard Danielpour, and Julia Wolfe, and received his undergraduate degree in 2007 from the Manhattan School of Music, where he studied with Nils Vigeland and Reiko Fueting. An active performer and lecturer, Christopher Cerrone has appeared as a guest musician with Alarm Will Sound, TACTUS, and the Manhattan School Percussion Ensemble. He has taught music theory at the Manhattan School of Music, lectured on contemporary music at Columbia University, the University of Pennsylvania, and the Berlin University of the Arts, and has taught electronic music and composition at Yale College.

His works are published by Outburst-Inburst Musics and Project Schott New York. He lives and works in Brooklyn, NY.