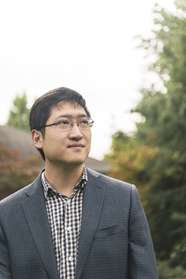 Composer and pianist Anthony Cheung has a body of work that ranges from solo to orchestral works. His music reveals an interest in the ambiguity of sound sources and the subtle transformation and manipulation of timbre allied with harmony. Representations of space and place are common themes, achieved through innovations in spatialization and orchestration, as well as actual source material via field recordings. Musical artifacts, both imaginary and allusive, become sites of fragmentation or excavation. The music also frequently engages poetic imagery, syntax and rhetoric, natural phenomena, and is heavily influenced by improvisatory traditions.

His recordings include three portrait discs: Cycles and Arrows, with the Spektral Quartet, ICE, and Atlas Ensemble (New Focus, 2018), Dystemporal, with the Talea Ensemble and Ensemble Intercontemporain (Wergo, 2016), and Roundabouts, with the Ensemble Modern and Frankfurt Radio Symphony Orchestra (Ensemble Modern Medien 2014). As a performer and advocate for new music, he was a co-founder of the Talea Ensemble, performing as a pianist and serving as artistic director.

The recipient of a 2016 Guggenheim Fellowship, Cheung has also won awards from the American Academy of Arts and Letters and ASCAP, and first prize in the Sixth International Dutilleux Competition (2008), as well as a Rome Prize from the American Academy in Rome (2012). He received a BA in Music and History from Harvard and a doctorate from Columbia University, and was a Junior Fellow at Harvard. He studied composition with Tristan Murail and Bernard Rands, and piano with Robert Levin and Paul Hersh. He taught at University of Chicago from 2013-20, and joined the faculty of Brown University in 2020.