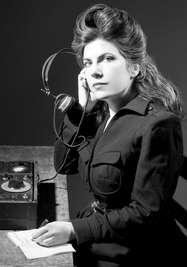 Annie Gosfield, whom the BBC called “A one woman Hadron collider” is a composer based in New York City. Her compositions reveal the inherent beauty of found sounds, noise, and machinery, in music that often merges acoustic instruments with unorthodox sources. She has written pieces for violin and jammed radio signals, a concert-length work for her band that recreates factory environments, and an opera that incorporates air raid signals. Her personal approach to working with musicians emphasizes the unique abilities of each performer. In recent years, Annie’s music has evolved from chamber work and performances by her own group to large scale projects including opera and orchestral music. In all of her work, she invites the listener to appreciate all sounds, without dividing the world into separate categories of music and noise.

Gosfield has been awarded fellowships from the Guggenheim Foundation (2017), the American Academy in Rome (2015 Fromm Composer in Residence), the American Academy in Berlin (2012), the Foundation for Contemporary Arts (2008), NYFA (2000, 2004), and the Siemens Foundation (1999), who commissioned EWA7, a site-specific piece performed in a factory in Nuremberg, Germany. In 2016 she was awarded a MusicAlive residency by the League of American Orchestras.

In 2017 Gosfield composed an opera based on “War of the Worlds” that was commissioned by the Los Angeles Philharmonic in a collaboration with groundbreaking director Yuval Sharon and his company “The Industry.” It was broadcast and performed throughout Los Angeles by way of repurposed air raid sirens, in a citywide site-specific installation, coupled with a live performance at Disney Hall that was narrated by Sigourney Weaver and conducted by Christoper Rountree. Critically acclaimed, it was included in “Best of 2017” lists in the New Yorker and the L.A. Times. Recent projects also include a new work for New Music Detroit inspired by Diego Rivera’s “Detroit Industry” frescoes, a commission from the Library of Congress, and a series of concerts at Bang on a Can’s inaugural “Loud Weekend” Festival.

Active as an educator, Gosfield has taught composition most recently at Columbia University. She has been a visiting lecturer at Princeton University and UT Austin, a visiting artist at CalArts, and held the Milhaud chair as Professor of composition at Mills College. She regularly writes for the New York Times’ series on composition The Score, contributing articles informed by her unusual career and varied experiences.

Gosfield’s discography includes four portrait CD’s on the Tzadik label, most recently “Almost Truths and Open Deceptions” which features a cello concerto, music by her own electric group, her unique approach to acoustic chamber music, and a piece for piano and a malfunctioning shortwave radio. Other CD's include “Flying Sparks and Heavy Machinery,” which focuses on machine sounds and factory environments with her band’s performance of EWA7, as well as an industrial-inspired work for string quartet and percussion quartet. “Burnt Ivory and Loose Wires” features music for detuned and prepared piano, saxophone quartet, and cello. “Lost Signals and Drifting Satellites” features her signature solo pieces and a string quartet. Other CD’s include “Lightning Slingers and Dead Ringers” on Cantaloupe with pianist Lisa Moore, “The Blue Horse Walks on the Horizon” on New Amsterdam by the Jasper Quartet, and work on Sony Classical, ECM, Sono Luminus, Innova, EMF, CRI, Starkland, Mode, ReR, Harmonia Mundi, Wergo, CRI, and Atavistic.