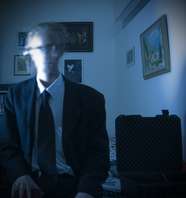 Adrian Knight (b. 1987) is a Swedish composer and multi-instrumentalist. His work, which “paints a curious American landscape filled with nostalgia and decay, violence and melancholic solitude” (NewMusicBox), is characterized by its lush harmonic language, rhythmic plasticity, and startling unpredictability underpinning its ruminative surface. A musical polymath and tireless experimentalist, his compositions and recordings defy easy categorization and attest to his pursuit of an entirely intuitive music rooted in an ongoing examination of symmetry and structure as spontaneous elements of our brains’ vocabulary. Knight’s scores are published by Project Schott New York and Svensk Musik.

Previous commissions by The Living Earth Show, Andy Meyerson, Karl Larson, Maya Bennardo, the Johnstone Foundation, Bearthoven, TIGUE, Post:ballet, the Yale School of Drama, Margaret Lancaster, Norfolk Chamber Music Festival and others have resulted in a sizable collection of works for diverse instruments, many of which have become mainstays of the ensembles’ repertoire.

His recordings have been released on Cantaloupe, Irritable Hedgehog, Innova, Galtta Media, Thanatosis, Slashsound and Perfect Wave, and have been featured on New Sounds WNYC, ClassicalMPR, WFMU, Resonance FM and NTS Radio to name a few.

He has received numerous awards and grants from the Society of Swedish Composers, STIM Sweden, ASCAP and the Royal Swedish Academy of Music. Knight holds degrees from the Yale School of Music (M.M. 2011) and The Royal College of Music in Stockholm (B.A. 2009).

In addition to his compositional work, Knight is an accomplished studio musician and and an active member of several groups, including Blue Jazz TV, Alice Cohen and the Channel 14 Weather Team, Private Elevators and Synthetic Love Dream. His steady output of solo albums released on Galtta Media has generated a dedicated following in the underground cassette community.

He is currently finishing up a work for two pianos and two percussionists, a solo piano work for Timo Andres, and a portrait album of new and old work to be released later this year. He lives and works in Brooklyn, NY.