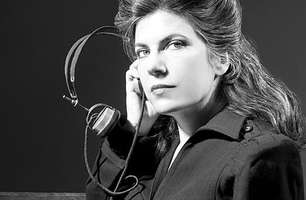 The Sound and Music of Annie Gosfield

Annie Gosfield has long been celebrated for her uncanny ability to summon sounds: metaphors abound, from physics (“a one-woman hadron collider”) to electronics (“out of static and bleeps can come, yes, melodies”). Gosfield’s music often incorporates the sound of technologies; but more than engaging with the longstanding sound/noise debate, in Gosfield’s imagination, those sounds become portals to explore the fabric of American aurality.  A staple of New York’s downtown musical community since the 1990s, Gosfield’s music is rich with contentious histories of sound, noise, and listening: the scratch of the phonograph needle, the crackle of the radio receiver, the din of a baseball stadium, the clang of factory floors. Gosfield inhabits and illustrates chapters in these sonic worlds, spinning narratives that thread unorthodox patterns, challenging performers and audiences to listen differently.

Cranks and Cactus Needles (2000) exemplifies Gosfield’s approach to the materiality, symbolism, and aesthetics of sound technologies. Titled after the material apparatus of the phonograph—the cranks that wound the turntable and the cactus spines often used in place of standard metal needles—this piece draws morphological and acoustic similarities between musical instruments and phonographs, instructing performers to play “distant and ghostly, like a Victrola down the hall.” Not only an emulation of the sounds of the phonograph, Cranks and Cactus Needles evokes this technology’s embedded domestic history, with the small chamber ensemble of piano, violin, cello and flute breathing and scratching until the turntable winds down, ending with an elegiac texture.

Gosfield’s interest in early-20th-century technologies is also expressed in Five Characters Walk Into a Bar (2010), a work for solo piano layered with hidden meanings. A part of Gosfield’s long-standing research into wartime communication technologies, the “five characters” in the piece’s title refer to five-character encoded messages used by the Danish resistance during the second World War. Embedded in a measure of music (a “bar”), Gosfield’s collection of five pitches is mutated, transformed, and repeated—but not in ways that are audible to the listener. Rather than a didactic or serially-informed exercise, Five Characters Walk Into a Bar expresses the turbulence of war: of frantic communication through technological constraint at all costs.

Phantom Shakedown (2012) is an example of Gosfield’s incorporation of sampled sound recordings into music for acoustic instruments. Composed for piano and audio playback, this work enmeshes the acoustic piano in a sonic web of “detuned and prepared pianos, a grinding cement mixer, the howl of a malfunctioning shortwave radio, and a mixed din of tube noise and other failing technologies.” Brimming with rhythmic intensity, Phantom Shakedown creates an idiosyncratic acoustic landscape, with the piano relentlessly pulsing against electronic and machinic sound.

It is this theme—of the position of the human voice in a world of non-human sounds—that Gosfield explores in Voices Over the Buzz and Clatter (2018), a work that explicitly addresses, in the composer’s words, “women’s voices being heard above the din.” Here, Gosfield’s “industrial sounds” evoke both her own longstanding research into the sounds of industry and her imagination of her own grandmother’s experience as a sweatshop worker on the Lower East Side. Thematizing technological discourses of signal and noise, Gosfield lets melodic fragments “rise above the noisy, clattering metal rhythms.” But rather than imply simple equivalences—melody as message, or rhythm as noise—Voices Over the Buzz and Clatter enmeshes all sounds together, suggesting a radical reconfiguration of acoustic categories, and as a consequence, of the relationship between sound and narrative.

The Sound and Music of Annie Gosfield