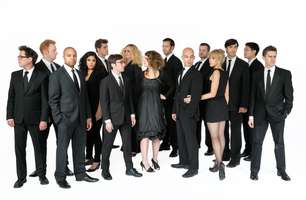 The Talea Ensemble is a New York based, twenty-member sinfonietta committed to promoting new and groundbreaking music through innovative programming and fiercely dedicated performances. By commissioning and presenting new American works and introducing important lesser-known works from abroad, the ensemble creates a boundary-challenging dialogue that fosters a deeper understanding of today’s musical culture.  Now in its seventh season, the Talea Ensemble is the recipient of the 2014 Chamber Music America/ASCAP Adventurous Programming Award and has been labeled “...a crucial part of the New York cultural ecosphere” by the New York Times.  By presenting the US premieres of large-scale works by composers such as Pierre Boulez, Georges Aperghis, Pierluigi Billone, Rand Steiger, Beat Furrer, Olga Neuwirth, John Zorn, and Fausto Romitelli, Talea has become an essential platform for many of the most vital and original voices in contemporary music. Equally importantly, Talea has opened a window to the creative and collaborative process through workshops and rehearsals open to all audiences.

“Championing works like these, and playing them with a compelling lucidity, are precisely what Talea Ensemble does best.” -The New York Times