On October 24, ArtPower and the UC San Diego Department of Music present the world premiere of Inheritance, a new chamber opera by Lei Liang.

Inheritance revolves around the bizarre life of Sarah Winchester, the eccentric widow and heiress to the Winchester rifle fortune.  According to popular belief, Winchester imprisoned herself in her labyrinth-like home to seek refuge from the spirits of those killed by the same weapons whose manufacture and sale gave her a life of indescribable wealth. With music by composer Lei Liang and libretto by poet Matt Donovan, Inheritance juxtaposes elements of Winchester’s biography with contemporary events in a work that explores America’s deeply complex relationship with guns. Produced by Susan Narucki, the world premiere performances of Inheritance are led by conductor Steven Schick with direction by Cara Consilvio and production design is by visual artist Ligia Bouton. Susan Narucki creates the title role of Sarah Winchester.

The composer notes the poignant relevancy that this work holds in today's society:

"Through a musical exploration of the life of Sarah Winchester, a woman trapped in circumstances she inherited, by portraying the ways in which she is reduced to perpetual acts of ineffectual penance, by interrogating a far-reaching history that extends from 19th-century massacres of Native Americans to contemporary school shootings, Inheritance hopes to raise questions about complicity, atonement and gun violence in America."

In addition to Inheritance, Lei Liang's music is heard on various other international stages this month. On October 19, the Formosa Quartet performs Liang's Song Recollections at the Meistersingerhalle in Nürnberg Germany and again on October 21 at the Kammermusiksaal at the Philharmonie Berlin. Next, on October 27, the Shanghai Philharmonic Orchestra, led by Hu Yong-yan, perform A Million Streams (the second part of Lei Liang's orchestral work, A Thousand Mountains, A Million Streams), at the Blüthner Grand Theater in Qingdao, China. Then, the Megalopolis Saxophone Orchestra, led by Andrew Steinberg, perform Garden Six on October 28 at Benzaquen Hall at the DiMenna Center for Classical Music and again on November 3 at First Church Cambridge in Boston.

Finally, we are delighted to announce the upcoming release of the premiere recording of Lei Liang's A Thousand Mountains, A Million Streams as well as Xiaoxiang and Five Seasons by the Boston Modern Orchestra Project (BMOP), directed by Gil Rose. BMOP gave the world premiere of this captivating new work for orchestra last April. The recording is on BMOP's own label (BMOP sound) and is available for pre-order.

Click on the image below to pre-order your copy of the new CD: 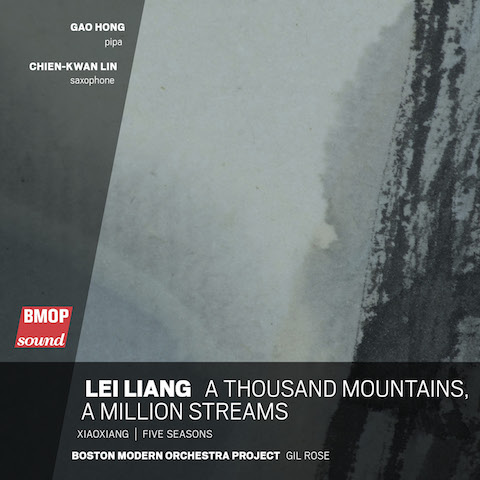 To learn more about the development of Inheritance, and the creative team behind the work, please visit inheritance-opera.org.