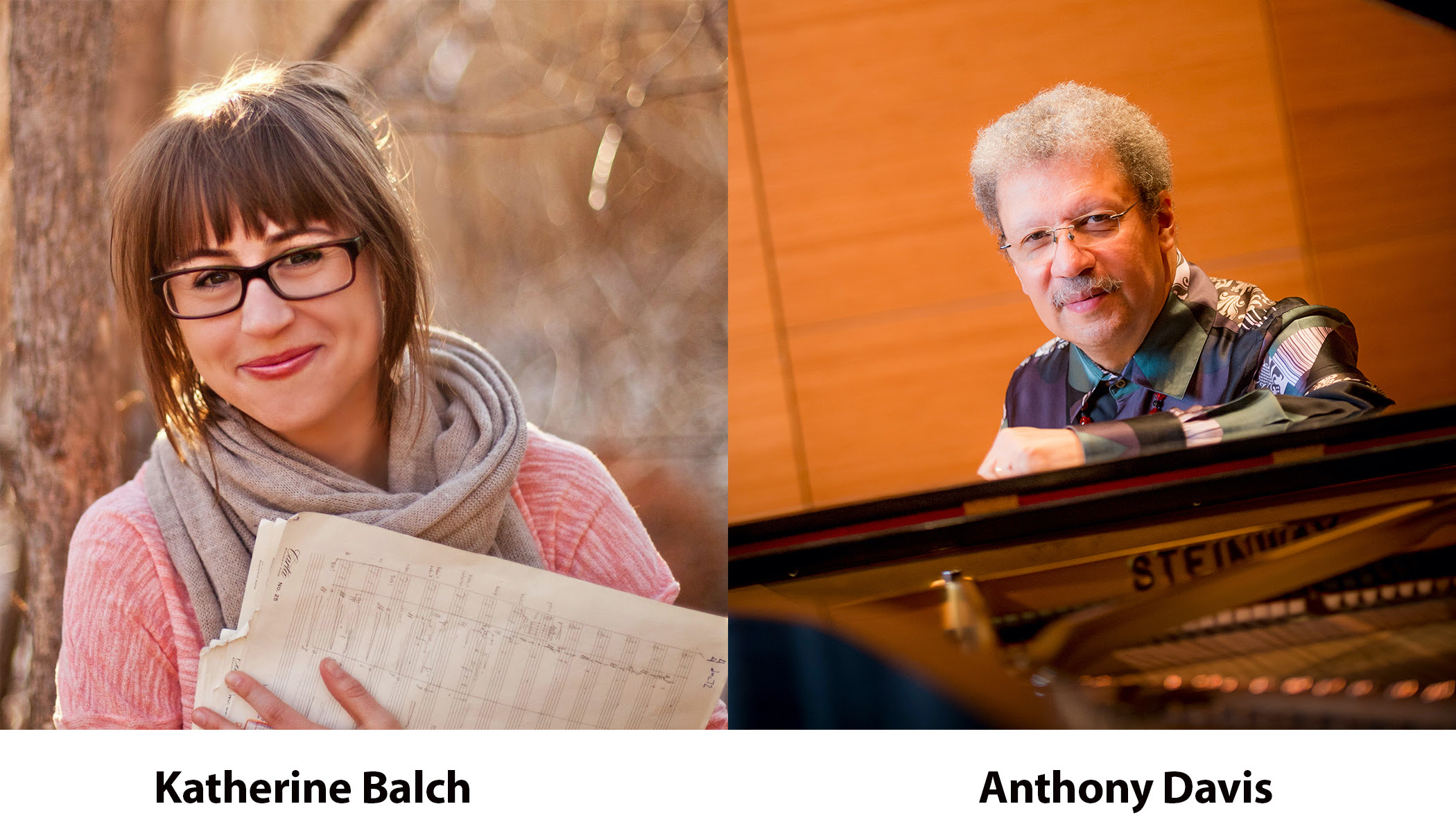 Norman Ryan, Vice President for Composers and Repertoire, states: "We are delighted to welcome Anthony Davis and Katharine Balch to Schott Music. Anthony Davis's extraordinary range of operatic, orchestral, chamber and choral works has brought him recognition as one of today's most distinguished figures in music. He is also highly acclaimed as a free jazz pianist and leader of the ensemble Episteme, with whom he has performed and recorded since the early 1980s. Katherine Balch is fast emerging as one of the most compelling and original new voices in classical music. We are thrilled to welcome her to Schott at this momentous point in her career and we look forward to developing a long and fruitful creative partnership with her and with Anthony Davis."

With the signings of Anthony Davis and Katherine Balch and the recent signing of James Diaz to PSNY, Schott continues its commitment to recognize, support, and promote the work of gifted composers at all stages in their careers.

The music of composer Katherine Balch (b. 1991) captures the magic of everyday sounds, inviting audiences into a sonic world characterized by imagination, discovery, and a rich diversity of styles. Katherine is often inspired by literature, nature, and science, aptly reflected in the San Francisco Chronicle’s description of her as “some kind of musical Thomas Edison – you can just hear her tinkering around in her workshop, putting together new sounds and textural ideas.” 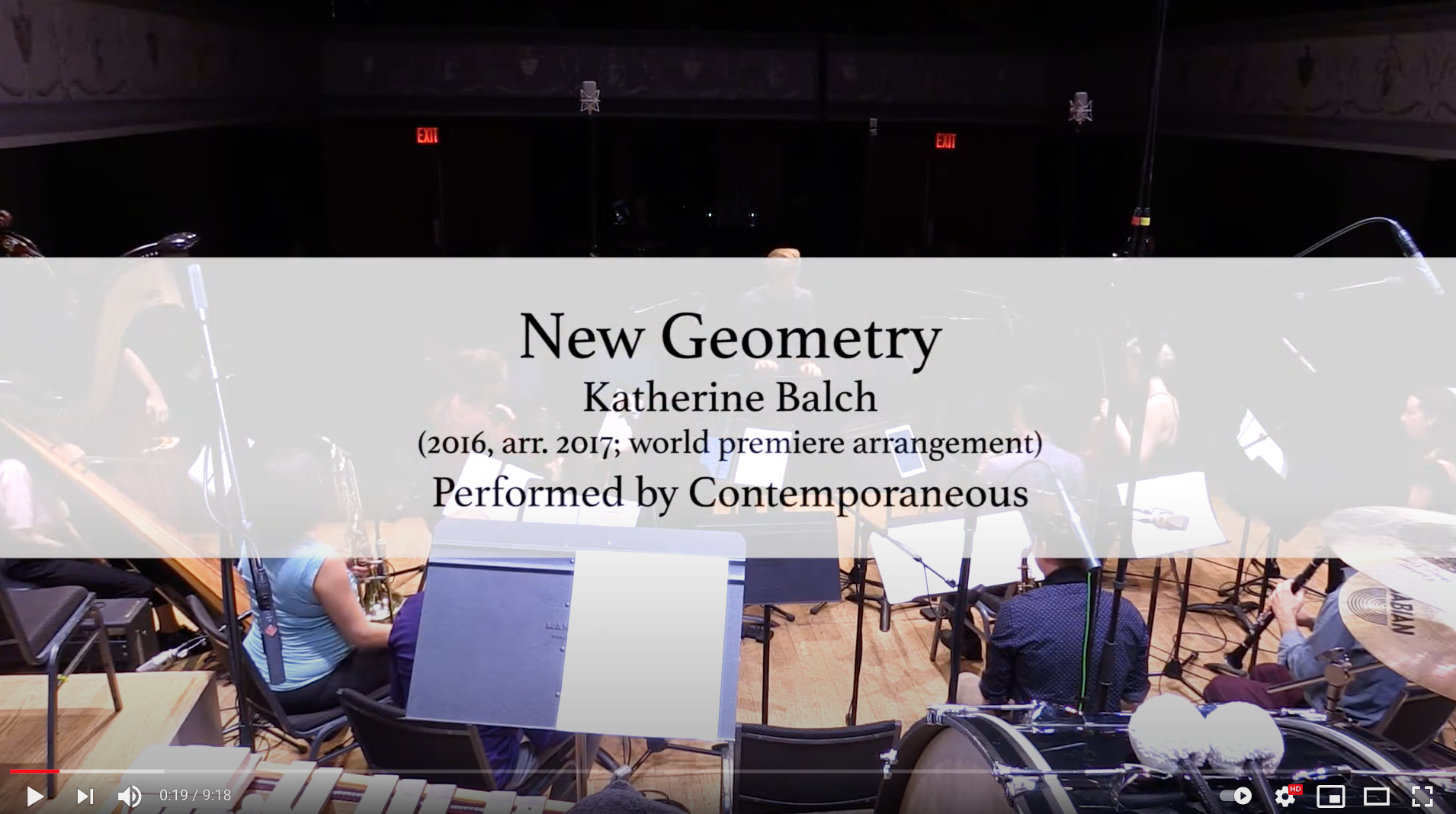 Katherine’s facility in elevating ordinary sounds through large-scale orchestration and dramatic narrative arcs has led to commissions and performances with the Los Angeles Philharmonic, London Sinfonietta, Orchestra Philharmonique de Radio France, Ensemble Intercontemporain, and the symphony orchestras of Boston, Minnesota, Oregon, Albany, Indianapolis, and Tokyo. She has been featured on IRCAM’s ManiFeste, Fontainebleau Music Festival, and Festival MANCA in France, Suntory Summer Arts and Takefu Music Festival in Japan, and the Aspen, Norfolk, Santa Fe, and Tanglewood music festivals in the United States. 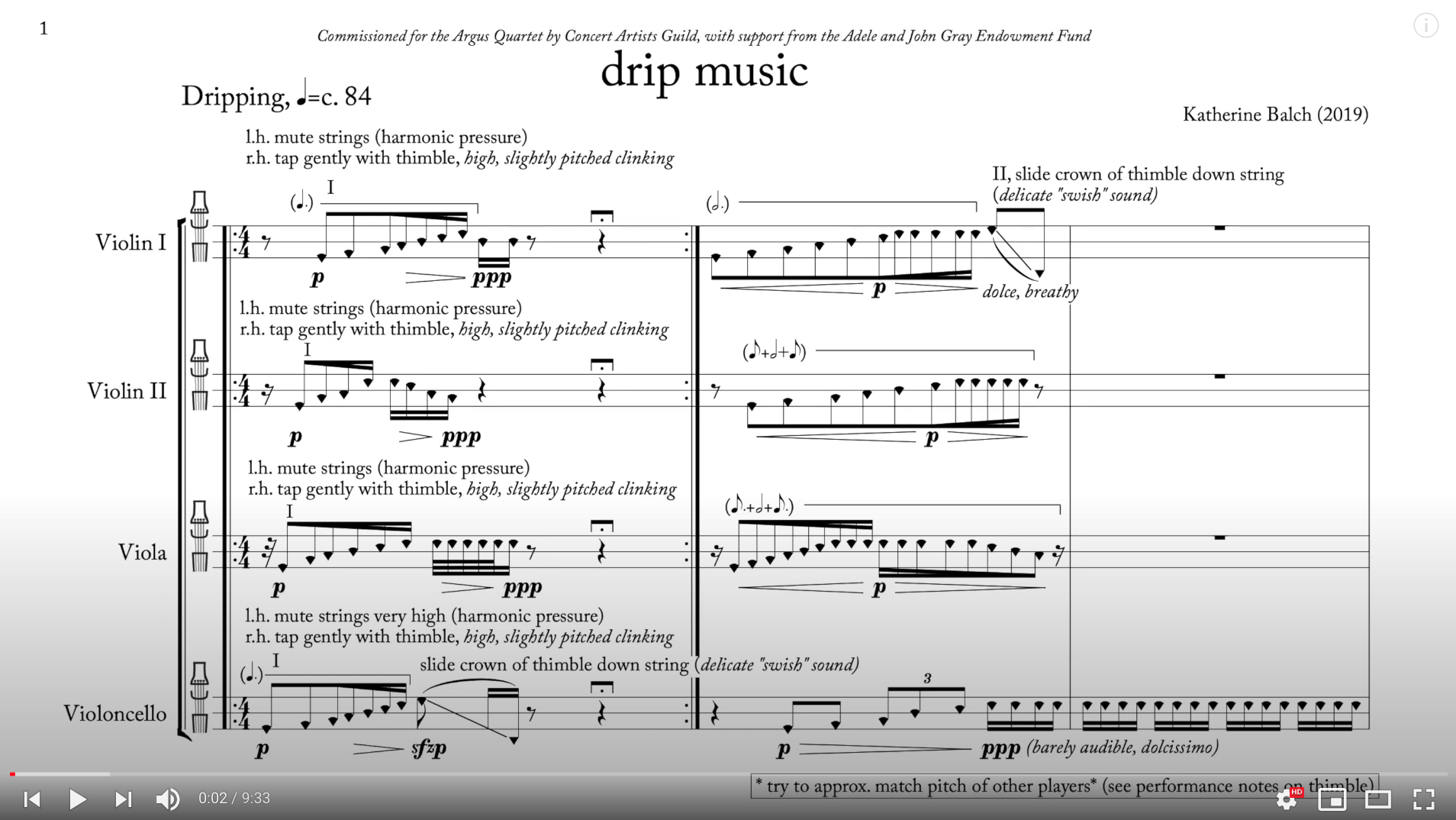 Nominated by violinist Hilary Hahn, Katherine was just announced as the recipient of the Dallas Symphony Orchestra’s 2020 Career Advancement Award. She has also been honored by ASCAP, BMI, the American Academy of Arts and Letters, Chamber Music America, and Barlow Foundation, and has served as composer-in-residence for Young Concert Artists and the California Symphony. She was signed to Project Schott NY (PSNY) in 2019 and is currently in residence at the American Academy in Rome as the Elliot Carter Rome Prize Fellow. Deeply committed to developing inclusive, engaging pedagogical practices that empower students through creative music-making, Katherine currently teaches composition and orchestration at Mannes School of Music. She is a doctoral candidate at Columbia University and an alumna of the Yale School of Music. 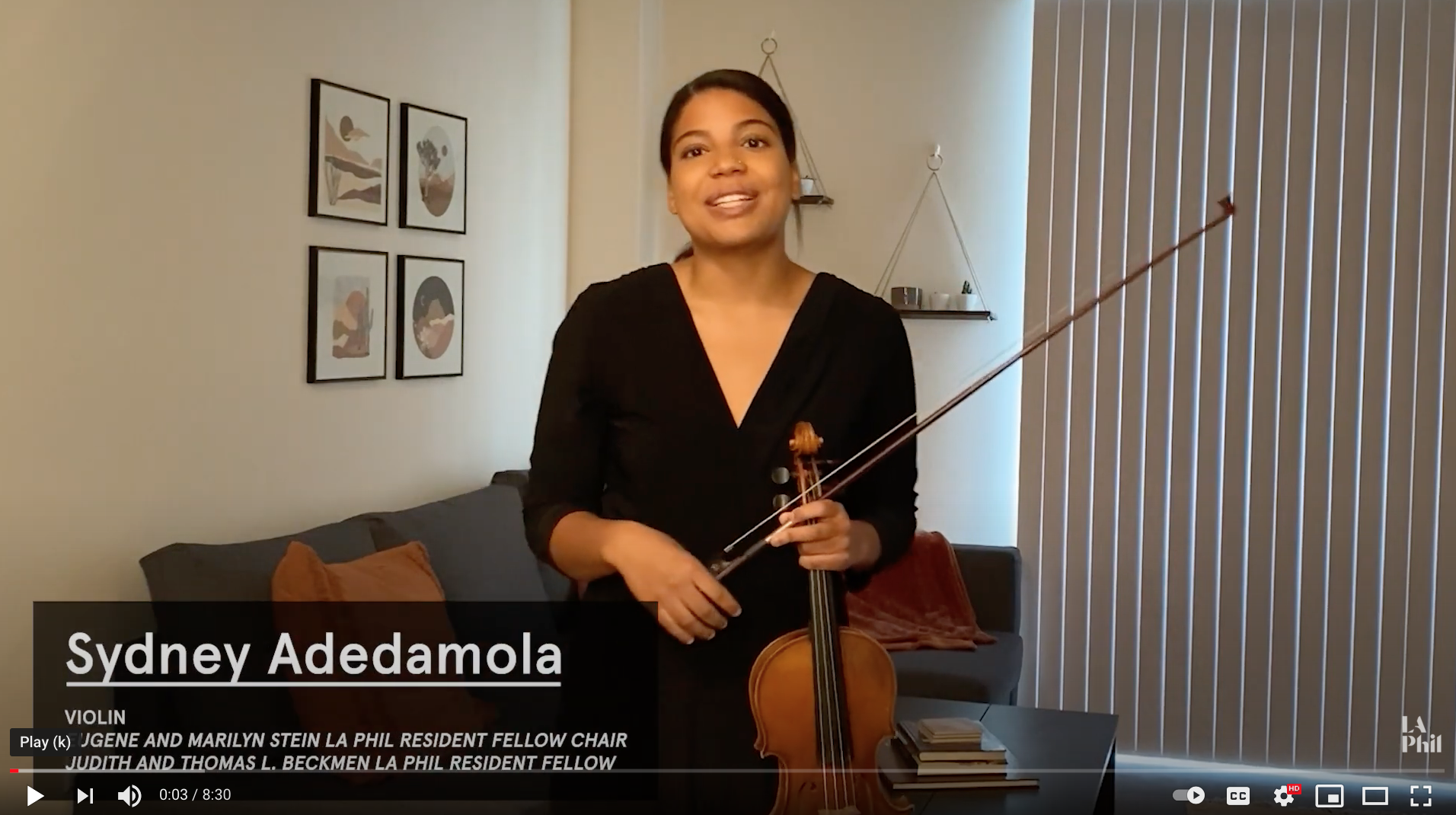 Opera News has called Anthony Davis, “A National Treasure,” for his pioneering work in opera.  His music has made an important contribution not only in opera, but in chamber, choral and orchestral music. He has been on the cutting edge of improvised music and jazz for over four decades. Anthony Davis continues to explore new avenues of expression while retaining a distinctly original voice. Mr. Davis has composed seven operas. X: THE LIFE AND TIMES OF MALCOLM X with a libretto by Thulani Davis, had its world premiere at the New York City Opera in 1986. A recording of the opera was released in 1992 on the Gramavision label and earned a Grammy nomination for music composition. UNDER THE DOUBLE MOON, with a libretto by Deborah Atherton, premiered at the Opera Theatre of St. Louis in 1989 and TANIA, an opera based on the kidnapping of Patty Hearst with a libretto by Michael John La Chiusa, premiered at the American Music Theater Festival in 1992. TANIA was recorded and released by KOCH International in October of 2001 and received its European premiere in Vienna in November 2003. His fourth opera, AMISTAD premiered at the Lyric Opera of Chicago in November 1997. AMISTAD was created in collaboration with librettist Thulani Davis and was directed by George C. Wolfe. A new production of the opera, directed by Sam Helfrich, debuted at the Spoleto USA Festival in Charleston, South Carolina in May 2008. A recording of the opera was released on New World in 2008. Anthony Davis’ opera WAKONDA’S DREAM with a libretto by Yusef Komunyakaa had its world premiere with Opera Omaha in March 2007. LILITH, an opera about Adam’s first wife based on Allan Havis’ acclaimed play with a libretto by the playwright, debuted in 2009 followed by LEAR ON THE 2ND FLOOR, an opera inspired by King Lear, in March 2013. His most recent opera THE CENTRAL PARK FIVE with a libretto by Richard Wesley was awarded the Pulitzer Prize in Music in 2020 and was presented at Long Beach Opera in 2019. Mr. Davis has two music theater works in development, SHIMMER, a music theater work about the McCarthy Era with Sarah Schulman and Michael Korie and TUPELO, a music theater work about the life of Elvis Presley written with Arnold Weinstein. 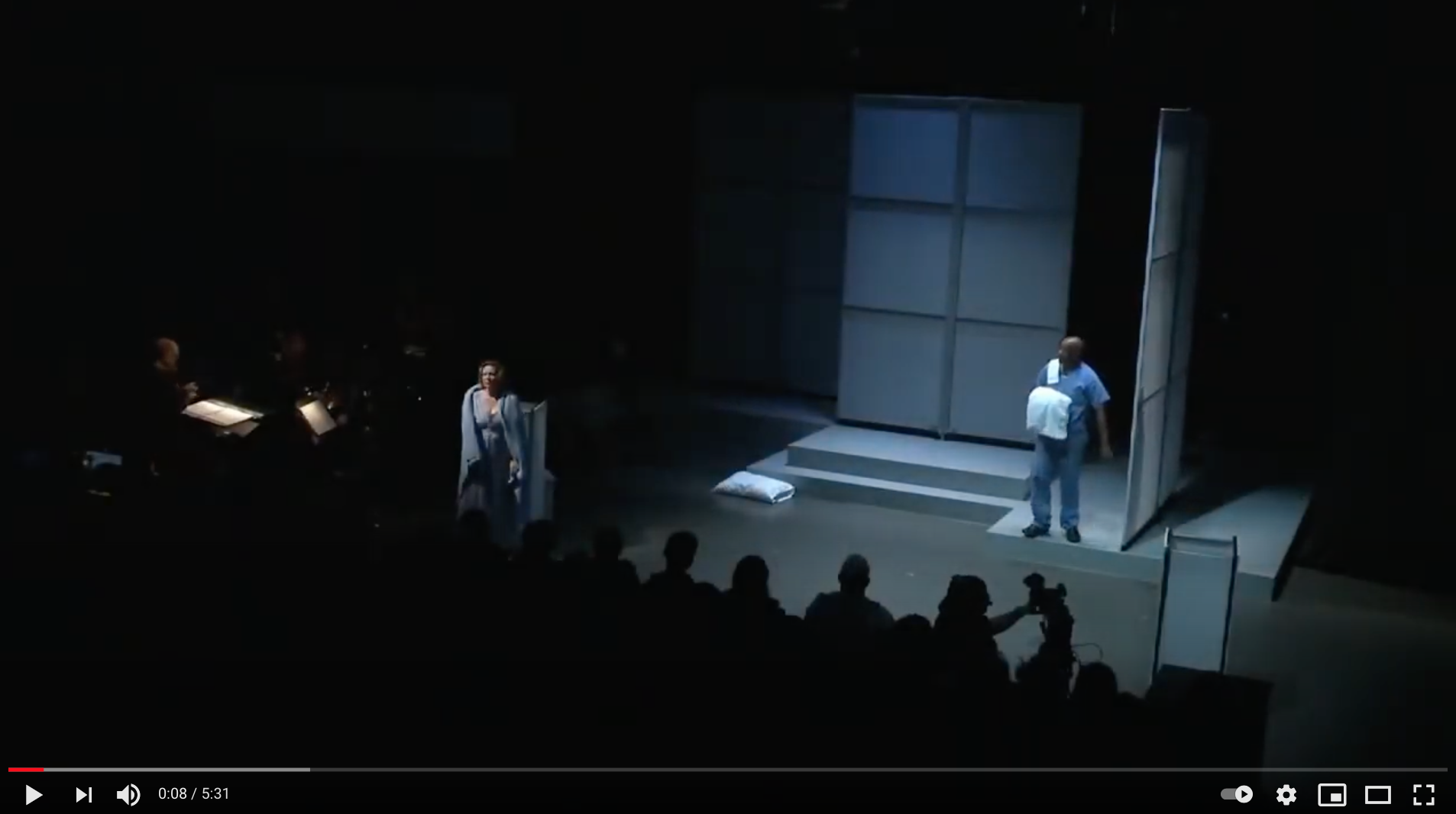 Excerpt from the world premiere performance of the opera Lear on the 2nd Floor
featuring Susan Naruki as Dr. Nora Lear and Jorell Williams as the Nurse

Anthony Davis has composed numerous works for orchestra and chamber ensemble on commissions from the San Francisco Symphony, Brooklyn Philharmonic, Atlanta Symphony Orchestra, St. Luke's Chamber Ensemble, Kansas City Symphony and the Massachusetts Institute of Technology. His other works include the music for the critically acclaimed Broadway production of Tony Kushner's ANGELS IN AMERICA: MILLENNIUM APPROACHES, PART ONE which premiered in May 1993 and PART TWO, PERESTROIKA which debuted in November of 1993. He has written two choral works. The first, VOYAGE THROUGH DEATH TO LIFE UPON THESE SHORES, an a cappella work based on the poem "Middle Passage" by Robert Hayden, is a harrowing tale about the slave trade and the fateful Middle Passage. His work, RESTLESS MOURNING, an oratorio for mixed chorus and chamber ensemble with live electronics, sets the poetry of Quincy Troupe and Allan Havis as well as the 102nd Psalm and presents a powerful evocation of the 9/11 tragedy. The Carolina Chamber Chorale premiered the work at the Piccolo Spoleto Festival in May 2002. 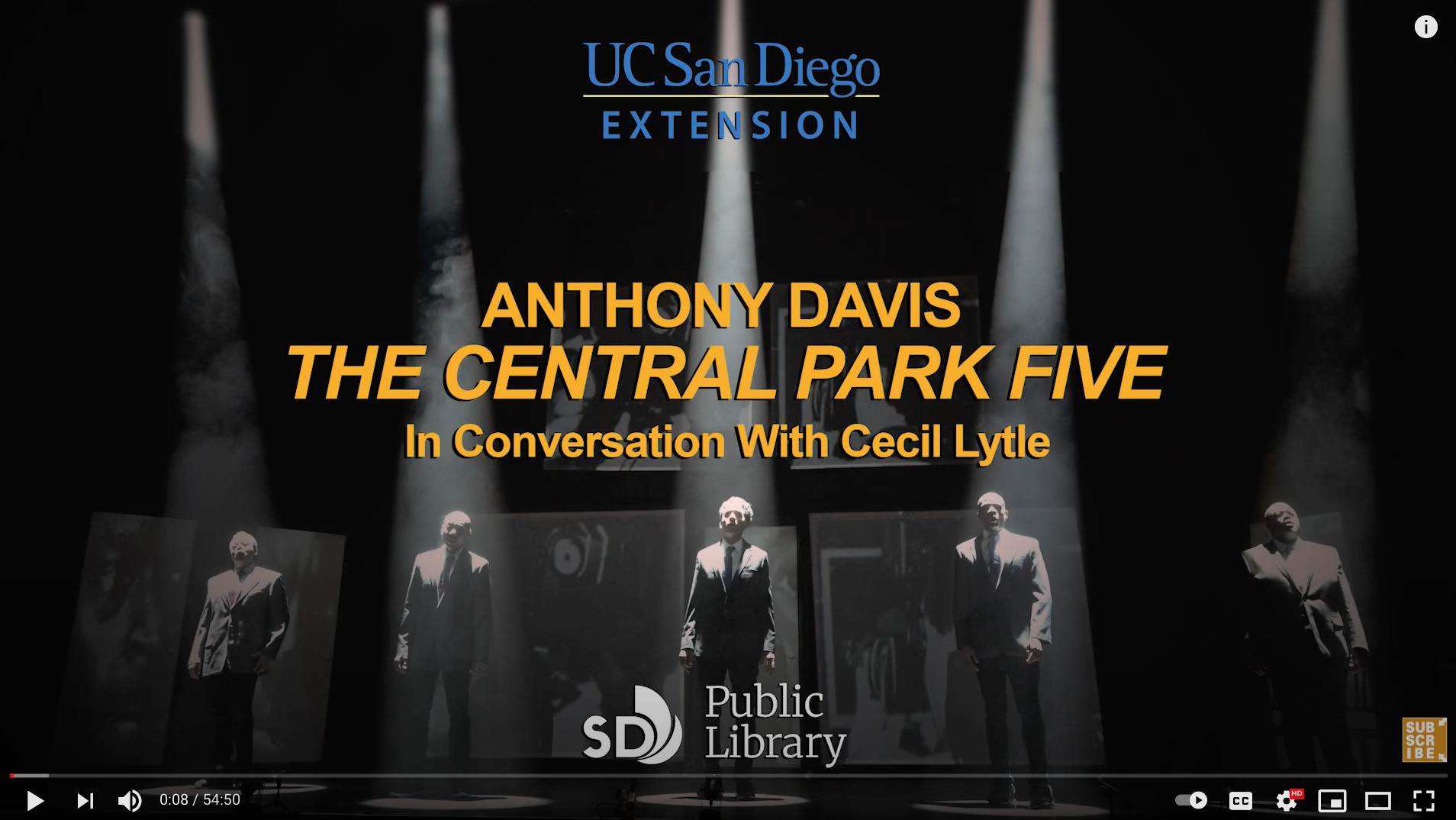 A graduate of Yale University in 1975, Mr. Davis is currently a distinguished professor of music at the University of California, San Diego. In 2008 he received the “Lift Every Voice” Legacy Award from the National Opera Association acknowledging his pioneering work in opera. In 2006 Mr. Davis was awarded a fellowship from the John Simon Guggenheim Foundation. Mr. Davis has also been honored by the American Academy of Arts and Letters, the New York Foundation of the Arts, the National Endowment of the Arts, the Massachusetts Arts Council, the Carey Trust, Chamber Music America, Meet-the-Composer Wallace Fund, the MAP fund with the Rockefeller Foundation and OPERA America. He has been an artist fellow at the MacDowell Colony, Civitella Ranieri and at the Rockefeller Foundation’s Bellagio Center in Italy. Anthony Davis, #BlackLives​ and Revolution in Opera with Bill Doggett

The Schott Music Group is one of the world's leading music publishers with headquarters in Mainz, Germany, and subsidiaries in six countries. Family-owned since 1770, the company, which operates the largest music distribution center in Europe, covers all aspects of music. The products and services offered by Schott Music include performance and teaching materials, urtext editions, concert and operatic works, study scores, complete editions, books on music, specialist magazines, audio recordings, E-Books and Apps, reaching all areas of musical life. One of the focal points of the publishing program of Schott Music is the publication of works by contemporary composers of the 20th and 21st centuries, among them Eötvös, Hindemith, Korngold, Ligeti, Orff, Norman, Stravinsky, Tippett, Weill, and Widmann. en.schott-music.com