We would like to send our very best wishes to Bernard Rands who celebrated his 85th birthday on March 2, 2019.

Bernard Rands is a major composer with over one hundred published works and recordings. The originality and distinctive character of his music has been described as "musicality and clarity of idea allied to a sophisticated and elegant technical mastery.”

Rands’s Canti d’Amor, recorded by Chanticleer, won a Grammy Award in 2000 and Boston Modern Orchestra Project’s iconic recording of his Canti Trilogy was released in 2005 to great critical acclaim.

Bernard Rands is a member of the American Academy of Arts and Letters and his music is published exclusively worldwide by Schott Music. We heartily extend our congratulations and best wishes to Bernard Rands on the happy occasion of his 85th birthday!

Notable Performances this Month:
Saxophonist Joseph Murphy, of Duo Montagnard, performs Bernard Rands's MEMO 6 for solo saxophone on March 14 at Ohio Northern University. On March 24, the Hear&Now Ensemble, led by Jerry Hou, perform Rands's ...in the receeding mist... and Three Pieces for Solo Piano at the Shepherd School of Music at Rice University. The next evening, pianist Daniel Pesca performs Four Impromptus, for solo piano, at the Logan Arts Center at the University of Chicago.

New Recordings:
A new CD of Bernard Rands's orchestral music entitled "Chains Like the Sea" was released by NMC Recordings on February 22. Featuring performances by the BBC Philharmonic Orchestra and cellist Johannes Moser, under the baton of Clark Rundell, the new CD includes some of Rands's most beloved orchestral works including Danza Petrificada, Concerto No. 1, and the eponomyous Chains Like the Sea. For more information and to order the recording, please click on the image below. 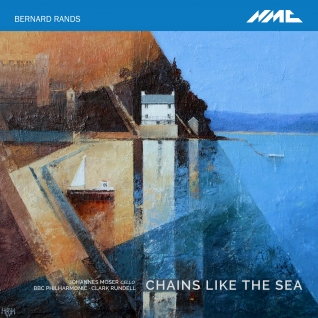 In addition, a recording of Bernard Rands's Concerto for Piano and Orchestra, performed by the BBC Scottish Symphony Orchestra, led by Markus Stenz, and featuring Jonathan Biss, Music for Shoko: Aubade, featuring English Horn player, Robert Walters, and Canti del Sole performed by the BBC National Orchestra of Wales, led by William Boughton, featuring tenor Stephen Chaundy, is forthcoming from Lyrita (Nimbus Records). For more information click here or on the image below. 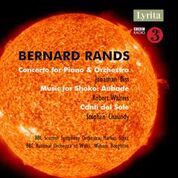 Music for Shoko: Aubade (2017)
for english horn and string quartet
8'