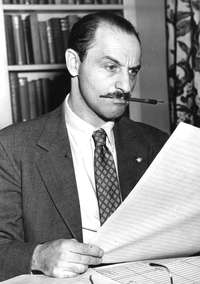 Marcus Samuel Blitzstein was born in Philadelphia on March 2nd, 1905. Born to an affluent family, his musical gifts were apparent at an early age. He went on to study piano with Alexander Siloti, (a pupil of Liszt and Tchaikovsky), and made his professional concerto debut with the Philadelphia Orchestra in Liszt’s E flat Piano Concerto when he was 21. After studying composition at the Curtis Institute of Music, he continued his studies in Europe with Arnold Schoenberg in Berlin,and Nadia Boulanger in Paris.

His early works, such as the PIANO SONATA (1927) and the PIANO CONCERTO (1931) are typical of the Boulanger-influenced products of American modernism - strongly rhythmic (although in Blitzstein's case, not influenced by Jazz), and described by himself as "wild, dissonant, and percussive." All of which was very far removed from the Schoenbergian line of compositional thought.

A new aesthetic, however, was taking shape in the early thirties, one that sought to make art useful and communicative to all audiences. Along with contemporaries such as Steinbeck and Copland, Blitzstein came to believe that “art for art’s sake” was creating a vast gulf between artist and audience.

“It is clear to me”, Blitzstein wrote in 1935, “that the conception of music in society … is dying of acute anachronism; and that a fresh idea, overwhelming in its implications and promise, is taking hold. Music must have a social as well as artistic base; it should broaden its scope and reach not only the select few but the masses”.

Thus he turned to the kind of socially conscious popular theatre created by Bertolt Brecht and Hanns Eisler, and wrote numerous articles that were published in left-wing journals such as 'New Masses' and 'Masses and Mainstream'. Shortly after the death of his wife, Blitzstein began work on his first opera, THE CRADLE WILL ROCK, at the suggestion on Bertolt Brecht.

THE CRADLE WILL ROCK premiered under Orson Welles' direction in 1937 to great acclaim. Finding inspiration from his newly discovered political consciousness, THE CRADLE WILL ROCK was followed by further political works, most notably the radio play I’VE GOT THE TUNE (1937), dedicated to Welles, and the musical play/opera NO FOR AN ANSWER, first performed in 1941. It was during this period Blitzstein first met Leonard Bernstein and the two formed a strong musical and personal bond.

During World War Two, Blitzstein joined the US Army Eighth Air Force as music director of the American broadcasting station in London.From this period,he composed the orchestral symphonic poem, FREEDOM MORNING (1943), which premiered in London at the Royal Albert Hall in September 1943. Blitzstein was later commissioned by the USAF to write his AIRBORNE SYMPHONY (1946), a large-scale work for soloists, male voice choir and orchestra.The piece, however, was nearly lost, as Blitzstein's papers disappeared in transit from England to America. The missing score subsequently reappeared, although not before he had recomposed the first movement. On re-examination, he felt that his recomposed opening was an improvement, and it was this version that was performed with Orson Welles as narrator and Leonard Bernstein conducting in New York in 1946.

In 1949 he returned to the stage with his most ambitious work, an operatic version of Lillian Hellman's play, THE LITTLE FOXES, entitled REGINA.

His greatest commercial success came with his adaptation of Weill and Brecht's THREEPENNY OPERA. Originally produced in 1952 at Brandeis, under Bernstein, it became one of Off-Broadway's longest running attractions. It also gave Blitzstein his only pop hit, "MACK THE KNIFE", which has been performed by artists as diverse as Bobby Darin, Louis Armstrong, and Robbie Wiliams. Additional works from this period include two works for theater – REUBEN REUBEN and JUNO AND THE PAYCOCK. His orchestral tone poem LEAR: A STUDY, was commissioned and premiered by the New York Philharmonic in 1958.

Blitzstein's last projects were two one act operas, IDIOTS FIRST, and THE MAGIC BARREL, both adaptations of short stories by Bernard Malamud, and SACCO AND VANZETTI, a commission from the Metropolitan Opera, New York. The trial and execution of the Italian immigrant anarchists, Nicola Sacco and Bartomoleo Vanzetti, in 1927, was an infamous left-wing cause célèbre. It had formed the subject of his earlier choral opera THE CONDEMNED (1932), and continued to fascinate him. All were to be left incomplete.

Blitzstein died on January 22nd, 1964. Leonard Bernstein, learning of Blitzstein's death as he was in his dressing-room preparing for a concert, dedicated the performance of the Eroica he was about to conduct to Blitzstein's memory, and wrote the following of his friend; "(He) was so close a personal friend that I cannot even begin to measure our loss of him as a composer. I can only think that I have lost a part of me, but I know also that music has lost an invaluable servant. His special position in musical theatre is irreplaceable."