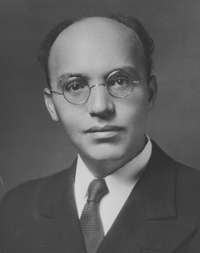 Kurt Weill was born on 2 March 1900 in Dessau, Germany. The son of a cantor, Weill displayed musical talent early on. By the time he was twelve, he was composing and mounting concerts and dramatic works in the hall above his family's quarters in the Gemeindehaus. During the First World War, the teenage Weill was conscripted as a substitute accompanist at the Dessau Court Theater. After studying theory and composition with Albert Bing, Kapellmeister of the Theater, Weill enrolled at the Berlin Hochschule für Musik, but found the conservative training and the infrequent lessons with Engelbert Humperdinck too stifling. After a season as conductor of the newly formed municipal theater in Lüdenscheid, he returned to Berlin and was accepted into Ferruccio Busoni's master class in composition. He supported himself through a wide range of musical occupations, from playing organ in a synagogue to piano in a Bierkeller, by tutoring students (including Claudio Arrau and Maurice Abravanel) in music theory, and, later, by contributing music criticism to Der deutsche Rundfunk, the weekly program journal of the German radio.

By 1925, a series of performances in Berlin and at international music festivals established Weill as one of the leading composers of his generation, along with Paul Hindemith and Ernst Krenek. Already at nineteen, he decided the musical theater would be his calling. In 1926, he made a sensational theatrical debut in Dresden with his first opera, Der Protagonist, a one-acter on a text by Georg Kaiser. Weill considered Der neue Orpheus (1925), a cantata for soprano, violin, and orchestra on a poem by Iwan Goll, to be a turning point in his career; it prefigured the stylistic multiplicity and provocative ambiguity typical of his compositional style. Modernist aesthetics are most apparent in the one-act surrealist opera Royal Palace (1926) on a libretto by Iwan Goll (exceptional in its incorporation of film and dance), and the opera buffa Der Zar lässt sich photographieren (1927) on a libretto by Georg Kaiser. By this time in his career, Weill's use of dance idioms associated with American dance music and his pursuit of collaborations with the finest contemporary playwrights had become essential strategies in his attempts to reform the musical stage.

A commission from the Baden-Baden Music Festival in 1927 led to the creation of Mahagonny (Ein Songspiel), Weill's first collaboration with Bertolt Brecht, whose Mann ist Mann and whose poetry collection, Die Hauspostille, had captured Weill's imagination and suggested a compatible literary and dramatic sensibility. The succès de scandale of Mahagonny encouraged Weill and Brecht to continue work on the full-length opera Aufstieg und Fall der Stadt Mahagonny (premiered at Leipzig in March 1930). Exploiting their aggressive popular song-style, Weill and Brecht also wrote several works for singing actors in the commercial theater, including Die Dreigroschenoper and Happy End. They explored other alternatives to the opera establishment in the school-opera Der Jasager and the radio cantatas Das Berliner Requiem and Der Lindberghflug. Increasingly uncomfortable with Brecht's restriction of the role of music in his political theater, Weill then turned to another collaborator, the famous stage designer Caspar Neher, for the libretto of his three-act epic opera, Die Bürgschaft (1931), and again to Georg Kaiser for the daring play-with-music Der Silbersee (1932). In both he refined his musical language into what he called "a thoroughly responsible style," appropriate for the serious and timely topics he addressed.

These later works outraged the Nazis. Riots broke out at several performances and carefully orchestrated propaganda campaigns discouraged productions of his works. In March 1933, Weill fled Germany; he and Lotte Lenya divorced soon thereafter. In Paris, Weill completed his Second Symphony and renewed briefly his collaboration with Brecht for Die sieben Todsünden, a "ballet with singing" for George Balanchine's troupe "Les Ballets 1933." He also wrote a number of cabaret chansons, as well as the score for Jacques Deval's Marie galante. When a German-language premiere of his Der Kuhhandel (libretto by Robert Vambery) seemed hopeless, Weill arranged for a London production of this operetta, which had been adapted as a British musical comedy and retitled A Kingdom for a Cow. In September 1935, Weill went to America, with Lenya, to oversee Max Reinhardt's production of Franz Werfel's biblical epic Der Weg der Verheissung, for which Weill had written an extensive oratorio-like score. After many delays, the work was finally staged in 1937 but in truncated form as The Eternal Road.

In the interim, the Group Theatre had recruited Weill to collaborate with distinguished playwright Paul Green on a musical play loosely based on Hasek's Good Soldier Schweik. Weill's innovative and extensive score for Johnny Johnson, though still recognizably European in accent, established the composer on the American scene. For a brief period in 1937, Weill had two works running simultaneously in New York. Encouraged by his reception and convinced that the commercial theater offered more possibilities than the traditional opera house, Weill and Lenya decided to stay in the United States, remarried, and applied for American citizenship. Weill followed the Group Theatre to Hollywood and completed two film scores, including Fritz Lang's You and Me (1938). But he found the motion picture industry hostile to the type of film-opera he envisioned and thereafter always considered Broadway "home."

During the next decade, he established himself as a new and original voice in the American musical theater. He continued to enlist leading dramatists for the cause of musical theater, including the foremost playwright of the day, Maxwell Anderson. Their first collaboration, Knickerbocker Holiday, was only a modest success, but it showcased Weill's first American "standard," "September Song." Weill's first hit was Lady in the Dark, a musical play about psychoanalysis by Moss Hart with lyrics by Ira Gershwin, his return to the theater after his brother's death in 1937. A daring experiment, with music restricted to only the dream sequences (a technique analogous to the use of color in The Wizard of Oz), Lady in the Dark broke Broadway records for production costs but recouped all of it in its 777 performances, with Gertrude Lawrence appearing as Liza both on Broadway and national tour. Weill quickly acquired the reputation of being the finest craftsman in the business, no less for his large-scale musical forms than his unique insistence on orchestrating all of his own works.

The even greater success of One Touch of Venus (1943, book by S.J. Perelman, lyrics by Ogden Nash) gave Weill the credibility to embark on a series of bold ventures. He was elected as the only composer-member of the distinguished Playwrights Producing Company, which brought Elmer Rice's Pulitzer-Prize winning drama Street Scene to Broadway as an American opera, the first real successor to Porgy and Bess. With lyrics by the Harlem Renaissance poet Langston Hughes, Street Scene garnered more favorable reviews than had Porgy and enjoyed a longer Broadway run. Next teaming up with Alan Jay Lerner for an original musical entitled Love Life (1948), Weill used American musical idioms and a vaudeville frame to chronicle in non-linear form the impact of 150 years of "progress" on the marriage and family of Sam and Susan Cooper, who never age. Now considered the first "concept musical," its first genuine successor was Cabaret (1965), and even Stephen Sondheim found Love Life "very useful" for his own work. Weill's last Broadway piece was no less daring: the musical tragedy Lost in the Stars, adapted by Anderson from Alan Paton's novel Cry, the Beloved Country. Starring Todd Duncan and directed by Rouben Mamoulian, it challenged the Broadway institution and audience to a degree that would not be exceeded until the 1970s in the Sondheim-Prince collaborations.

During the forties, Weill had also contributed extensively to the American war effort, as well as a series of Jewish and Zionist pageants. Although all of the Hollywood adaptations of his musicals mutilated his scores, he enjoyed his work with Ira Gershwin on the original film musical Where Do We Go from Here? (1945). He was also very proud of his folk-opera Down in the Valley (1948), which received hundreds of productions in schools and communities throughout the nation. Weill was at work on a musical version of Mark Twain's Huck Finn and was planning another American opera (for baritone Lawrence Tibbett) when he suffered a heart attack shortly after his fiftieth birthday. He died on 3 April 1950. In his obituary Virgil Thomson identified Weill as "the most original single workman in the whole musical theater, internationally considered, during the last quarter century... Every work was a new model, a new shape, a new solution to dramatic problems."

His death came at the time that his German works were beginning to be rediscovered. Yet, the resulting dichotomy of the "two Weills" has thus remained for posterity to resolve. Although Weill claimed that he "didn't give a damn about writing for posterity," Maxwell Anderson prophesied in his eulogy that "it takes decades and scores of years and centuries to sift things out, but it's done in time -- and Kurt will emerge as one of the very few who wrote great music."