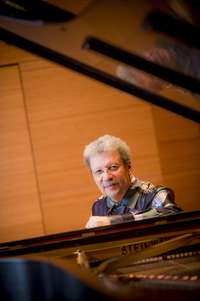 Opera News has called Anthony Davis “A National Treasure” for his pioneering work in opera. He is recognized internationally not only for his important contributions to opera but also as a distinguished composer of symphonic, choral and chamber works. Davis has been on the cutting edge of improvised music and Jazz for over four decades and continues to explore new avenues of expression while retaining a distinctly original voice. He was awarded the Pulitzer Prize in Music for his opera THE CENTRAL PARK FIVE in 2020.

Anthony Davis has composed eight operas. X: THE LIFE AND TIMES OF MALCOLM X with a libretto by Thulani Davis, played to sold out houses at its world premiere at the New York City Opera in 1986. It was the first of a new American genre: opera on a contemporary political subject. A recording of the opera was released in 1992 on the Gramavision label and earned a Grammy nomination in 1993 for “Best Contemporary Classical Composition.” The Detroit Opera debuted a new production in May 2022, which will travel to the Metropolitan Opera in November 2023. UNDER THE DOUBLE MOON, with a libretto by Deborah Atherton, premiered at the Opera Theatre of St. Louis in 1989 and TANIA, an opera based on the kidnapping of Patty Hearst with a libretto by Michael John LaChiusa, premiered at the American Music Theater Festival in 1992. TANIA was recorded and released for KOCH International in October of 2001 and received its European premiere in Vienna in November 2003. His fourth opera, AMISTAD, about a shipboard uprising by slaves and their subsequent trial, premiered at the Lyric Opera of Chicago in November 1997. AMISTAD was created in collaboration with librettist Thulani Davis and was directed by George C. Wolfe. A new production of the opera, directed by Sam Helfrich, debuted at the Spoleto USA Festival in Charleston, South Carolina in May 2008 and a recording of the opera was released on New World, also in 2008. Davis’s opera WAKONDA’S DREAM with a libretto by Yusef Komunyakaa had its world premiere with Opera Omaha in March 2007. LILITH, an opera about Adam’s first wife based on Allan Havis’s acclaimed play with a libretto by the playwright, debuted in 2009 followed by LEAR ON THE 2ND FLOOR, an opera inspired by King Lear, in March 2013. His most recent opera THE CENTRAL PARK FIVE with a libretto by Richard Wesley was given its world premiere at Long Beach Opera in 2019. New recordings of X: THE LIFE AND TIMES OF MALCOLM X and THE CENTRAL PARK FIVE are planned for release in the 2022/23 season.

In addition to his work in opera, Davis currently has two music theater works in development: SHIMMER, a music theater work with Sarah Schulman and Michael Korie, based on Schulman’s novel about an aspiring reporter, who is lesbian, and an aspiring playwright, who is black, trying to get ahead in the McCarthy Era and TUPELO, based on the life of Elvis Presley, written with Arnold Weinstein.

Davis’s catalogue also include two choral works: VOYAGE THROUGH DEATH TO LIFE UPON THESE SHORES, a harrowing tale about the slave trade and the fateful Middle Passage, written for a cappella voices and based on Robert Hayden’s poem "Middle Passage"; and RESTLESS MOURNING, an oratorio for mixed chorus and chamber ensemble with live electronics, which sets the poetry of Quincy Troupe and Allan Havis as well as the 102nd Psalm of David in a powerful evocation of the 9/11 tragedy. The Carolina Chamber Chorale premiered the work at the Piccolo Spoleto Festival in May 2002.

A graduate of Yale University in 1975, Davis is currently a distinguished professor of music at the University of California, San Diego. In 2008 he received the “Lift Every Voice” Legacy Award from the National Opera Association acknowledging his pioneering work in opera. In 2006, Davis was awarded a fellowship from the John Simon Guggenheim Foundation and has also been honored by the American Academy of Arts and Letters, the New York Foundation of the Arts, the National Endowment of the Arts, the Massachusetts Arts Council, the Carey Trust, Chamber Music America, Meet-the-Composer Wallace Fund, the MAP fund with the Rockefeller Foundation and OPERA America. He was elected to the American Academy of Arts and Letters in 2020 and has been an artist fellow at the MacDowell Colony, Civitella Ranieri and at the Rockefeller Foundation’s Bellagio Center in Italy.