We are thrilled to announce that Naxos has released Oberlin Music's—the official record label of the Oberlin Conservatory of Music—brilliant, new disc Rands at Oberlin, which includes recordings of two landmark works by Bernard Rands: Concerto for English Horn, commissioned for Oberlin's 150th anniversary in 2015, and the Pulitzer Prize-winning Canti del Sole. On this new recording, Rands's Concerto for English Horn is performed by Robert Walters, who is both principal English horn for The Cleveland Orchestra and a professor at Oberlin, alongside the Oberlin Orchestra, conducted by Raphael Jiménez. Rands's Concerto explores the lyrical, unique timbre of the English horn, playing with the tempo and instrumentation of the orchestra to throw the horn into relief; its final movement, "Hommage à C-AD", celebrates Rands's lifelong love of the music of Claude-Achille Debussy. This work complements the lyricism of Rands's Canti del Sole, here performed by tenor Magnus Staveland, which sets a multi-lingual collection of poetry relating to the sun into a single, uninterrupted movement, narrating the course of a day. On this new recording, Canti del Sole is masterfully performed by Staveland with the Oberlin Contemporary Music Ensemble, conducted by their long-standing director Timothy Weiss.

To order Rands at Oberlin, click here or on the image below. 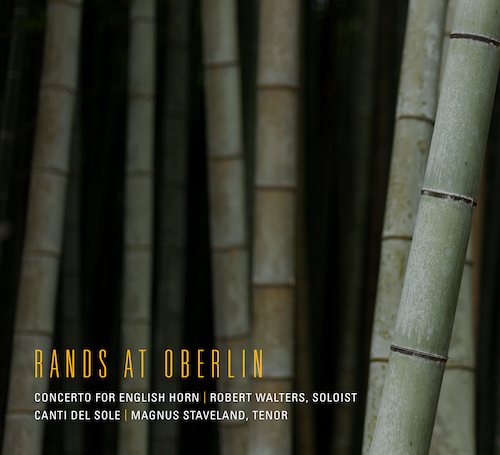